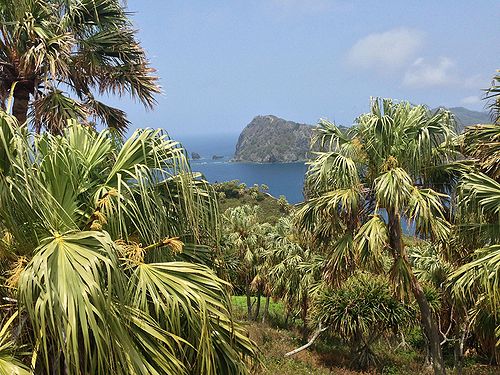 The first mention of Livistona boninensis was by Kittlitz (1844) in an account of his voyage through the northwest Pacific, where he noted "...eine grosse schöne Fächerpalme (Corypha japonica?)...", and included it in various illustrations of the Bonin Islands. Nakai (1936) argued that by Beccari (1921) who described it as a subspecies of L. chinensis in a diagnostic key to Livistona species, as L. chinensis var. boninensis. The first use of the name raised to specific rank as L. boninensis, was by Nakai (1928) in his Plants in Ogasawara Islands. Beccari (1931) maintained it as a subspecies of L. chinensis, and provided an expanded description. However, Nakai (1935) continued using the name at specific level, and placed Beccari's subspecies in synonymy. Moore & Fosberg (1956) re-established it as a subspecies, provided comparative illustrations with other subspecies, and established the type as Wilson 8271. Recently collected specimens seen at MAK, carry larger fruits than originally described, up to 30 mm long as opposed to 25 mm long in previous descriptions. Fruit are globose to subglobose with a tapered base. These differ from those in L. chinensis where those, are only up to 26 mm long in the largest specimens seen, varying from globose to ovoid but lacking any basal tapering. A peduncular bract is present in L. boninensis but is lacking in L. chinensis. There is also considerable difference in the degree of tomentum carried on the inflorescence bracts. In L. chinensis, the tomentum is dense and persistent, while in L. boninensis bracts are glabrous or only mildly tomentose becoming glabrous at maturity. Thus the taxon formerly known as L. chinensis var. boninensis is hereby reassigned to specific status in accordance with the taxonomy of Nakai (1935). (Dowe, J.L.)

A single peduncular bract. Fruit bright green at maturity. Degree of tomentum carried on the inflorescence bracts is dense and persistent.

"I think they are close enough geographically that cold hardiness wouldn't be a deciding issue but you never know til you check. No way to discern juveniles." (Dave Witt)

A newly described, rare species from the small Bonin Islands in the Pacific Ocean south of Japan. (RPS.com)