Latania lontaroides or red latan palm Grows on cliffs and in coastal ravines, 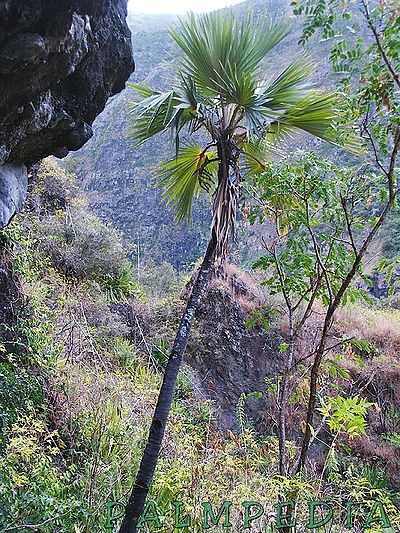 In Habitat, La Réunion Island - Photo: PADRE Jean François.
in the Mascarene archipelago but is now found only on the island of La Réunion, where it occurs on the coast between Petite Ile and Saint-Philippe where its habitat is also shrinking, the species was once common.

The red palm latan can reach 12 m height but grows quite slowly. The mature trunk is gray, smooth and slightly swollen at the base. It measures up to 25 cm in diameter and exhibits rings which are the scars of fallen leaves. The leaves are fan shaped, red with red petiole the first years, later green. The edges of the leaf and the main leaf veins are finely toothed. The leaves are stiff and worn by a petiole of 1-1.5 m long. They form a crown of 5-6 m in diameter. Editing by edric.

Sunny, moist, but well drained position. Cold Hardiness Zone: 10a. Will tolerate short periods of 28 F. (-2.22 C.) with some defoliation.

Conservation: Endangered - The species has declined in extent through increasing agriculture and settlement. It is traded internationally as an ornamental. (IUCN Red List 1998)

The Red Latan Palm is an endangered species with only a few surviving individuals on Reunion Island.

Red Latan Palms have stiff fan shaped leaves, giving them a unique appearance, and they make excellent pot plants when young. They are easy and satisfying to grow, not fussy and will flourish in a wide range of frost-free, warmer climates. The three species of Latania are easily distinguishable especially when young by the colour of the leafstalks for which they are named: red, blue, and yellow. Latania lontaroides has spectacular reddish leaves and red leafstalks when young.

The red latan palm is an attractive, medium to large, fan palm restricted to a small strip of coastline on a single island in the southern Indian Ocean. The rounded crown is made up of numerous, two to three metre wide, palmate leaves, while the straight, deep-grey trunk is lined with closely packed rings where the leaf sheaths have fallen away. When young, the stiff leaflets are distinctively tinged with red, hence this palm’s common name, but with age take on a deeper green colour. A dioecious species, male and female flowers are found on separate plants

Red Latania is from the Mascaregne islands, precisely from Reunion Island ( approx. 200 kms from Mauritius ). Not commonly found in Mauritius , though easier or less difficult than the 2 others ( Blue from Mauritius and Round Island and yellow from Rodrigues )The Red one is also often confused with Blue or Yellow Latania here. In some places where it is found are also Blue or Yellow Latanias and the Red Latanias found in Mauritius are often hybridised with Yellow or Blue. So it is not so red as those from their native Reunion Island. At the moment am experiencing it from seeds which i myself confused for being Yellow Latania but instead it was the Red one the rarer of the 3 ! Soaked for 1 day in tap water and another 2 days in diluted growth powder ( Mairol ; half teaspoon in 2 liters of water . ) Already can notice at the bottom the sprouting root. So i could say it is in fact very easy, also i collected the seeds myself and very fresh ones. Hoping to see leaves coming in a couple of weeks time. (timrann - Mauritius Island)

"This is my favorite of the Latan palms as it has the most coloration as a seedling: bright red and green. As an adult I can't tell it apart from a Blue Latan Palm- both have grey leaves and looks sort of like anemic Bismarckias. The Latan Palms are from the Mascarene Islands and are nearly extinct. This is a truly heat-loving palm and tends to suffer in areas that remain cool for a long time (inland So Cal for example). I has been grown successfully along the coast in So Cal, but is very slow here, taking up to 15 years to lose its juvenile colors (which is actually a good thing) and start to form a trunk. I have yet to see a mature Latania lontaroides in all of California, so there may be difficulties encountered later in life, too, since many hundreds have been tried." (Geoff Stein)

Latania is a genus of 3 species, native to the Mascarene Islands. They have stiff fan shaped leaves, giving them a unique appearance, and they make excellent pot plants when young. They are easy and satisfying to grow, not fussy and will flourish in a wide range of frost-free, warmer climates. The tree species are easily distinguishable especially when young by the colour of the leafstalks for which they are named. Latania lontaroides has spectacular reddish leaves and red leafstalks when young. (RPS.com)