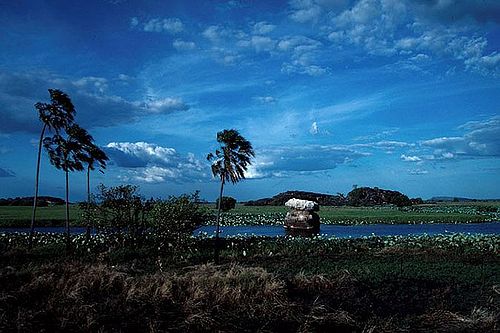 Northern Territory of Australia. Photo by tropicbreeze
In Australia in the Northern Territory from Daly R. across the Top End to east Arnhem Land, and in Queensland from Moa Is. in Torres Strait through Cape York to McIlwraith Ra. In Papua New Guinea in the Western and Central Provinces, and in Indonesia in Papua, Merauke Division. Grows in swamp forests, on alluvial flats, on the leeward side of mangroves and in moist to wet areas in monsoonal thickets and gallery forests at low elevations, 0-100 m alt.

As with L. muelleri, Bailey (1898) first described L. benthamii as a possible new variety of L. humilis, but subsequently described it based on the specimen Jardine s.n. (Bailey, 1902). Bailey noted "... I place this and a palmate-leaved palm from Cairns as varieties of Dr. Robt. Brown's Livistona humilis for the present: but hope to have full and complete material for a more satisfactory arrangement when working up the order for my work now in hand on the Queensland Flora...". In naming both L. benthamii and L. muelleri, Bailey (1902) wrote:"... give them specific rank bearing the names of the authors of the Flora Australiensis...". For the population occurring in the Northern Territory, Australia, Beccari (1921) provided the name L. holtzei based on Holtze s.n. and for New Guinea, Burret (1939) provided the name L. melanocarpa based on Brass 6310 collected from Western Prov., Papua New Guinea. Both of these taxa are attributable to L. benthamii. Livistona benthamii is a large canopy palm to 18 m tall, with long retained petiole stubs; leaves are moderate to large and regularly segmented; segment apices are pendulous, and with a bifurcate cleft to 75% of the segment length; the inflorescence is unbranched, not extending beyond the limit of the crown, and with up to 9 partial inflorescences; bracts are tightly sheathing; flowers are whitish cream to pale yellow; fruit are globose to obovoid o pyriform, to 13 mm long to 11 mm wide, and pruinose purple black at maturity. (Dowe, J.L.)/Palmweb.

Very small round black seed are rubbed clean and put into shallow trays. Germination is good, and two or three months later little strap leaves appear. Standard horticultural practice will give a 200mm pot plant with many deeply cut leaves, ready for a shady spot in the garden. Good air circulation in the growing area is necessary to prevent fungus attack. Benthams grow fairly quickly given plenty of-water and fertilizer.

"This palm has a somewhat similar appearance, to the much more common Livistona decipiens (now decorum), and Livistona australis wtih the typical drooping leaflets, though it tends to hold more leaf bases near the base of the palm. It is a smaller and less statuesque palm. The teeth on the petioles are huge and curved and very sharp. Cultivationally, at least here in California, this one is a much harder plant to grow, seeming to dampen off or rot very easily when young. It is very slow and finicky as a seedling. Mature plants are very rare in southern California." (Geoff Stein)

A moderately tall, fast growing fan palm from northern Australia and New Guinea, that is well suited to cultivation in tropical or warm subtropical areas. It likes abundant water and will grow well in waterlogged soils, and areas with brackish water and coastal exposure. While young, it makes a very pretty house plant. (RPS.com)