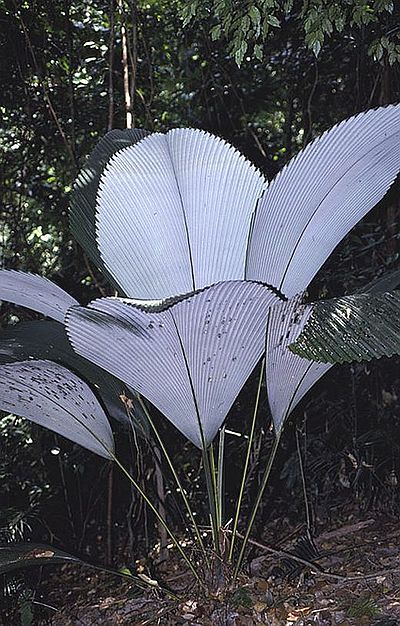 As the name suggests this is a magnificent plant, not just one of the finest palms, but also one of the most spectacular plants around. It is a trunkless palm, with enormous spear shaped, entire leaves up to 3 metres long, (the first metre of which is petiole) and up to 2 metres wide. The underside is covered in fine white hairs which give it a silvery appearance. These leaves arch over and leave any viewer with an unforgettable sight. Editing by edric.

Warm (tropical / warm sub-tropical), sheltered, shady, and moist, but well drained. Keep out of the wind. Intensely dislikes root disturbance. Be very carefull when potting up or out.

"Joey Palm is the shorter English equivalent for this magnificent - as the descriptive epithet 'magnifica' rightly tells us - so-called 'understory' palm. The genus 'Johannesteijsmannia' has since the work of Harold Emery Moore (1917-1980), the eminent American palm expert, been divided into four kinds: altifrons, lanceolota, perakensis and this particular magnifica. The Magnifica, especially, is an endangered species because it regenerates only slowly and has become popular as a decorative plant (thus it's plucked out from the jungle floors and in fact destroyed). There are several programmes now in effect which try to save it. A number of botanical gardens treasure this Johannesteijsmannia magnifica. Among the places I've seen it is the beautiful Rimba Ilmu (Forest of Knowledge) of the University of Malaysia, where this photo was taken; it's also been planted in the Lake Gardens, the Taman Tasik Perdana, in the centre of Kuala Lumpur....

Indeed, the leaves are enormous. Consider their huge size in comparison with the five-foot-eleven Pharmacist from V. (See Photo by Rana Piplens) The in English relatively unwieldy name derives from Johannes Elias Teijsmann (1808-1882), the 'hortulanus' - chief gardener or nurseryman - throughout most of the nineteenth century of the Kebun Raya - then called 's Lands Plantentuin - of what is today Bogor (then Buitenzorg) just to the south of Jakarta on Java in Indonesia. He was a great all-round botanist and among many things is renowned too for being one of those who introduced the oil palm into Southeast Asia for commercial purposes. An expert on palms, it is fitting that this beautiful, leafy palm is named for him, first with the incorrect and shorter spelling 'Teysmannia'; since Moore's work with the longer, more correct and actually - I would hazard - more elegant name. It's thrilling to examine this palm more closely to see how the leaf surfaces are different from each other." (Rana Piplens)

Similar in most respects to Johannesteijsmannia altifrons but, if anything, even more spectacular. J. magnifica has large, simple, undivided leaves that can reach a length of more than 3 m (10 ft.) and a width of up to 2 m (7 ft.), rising directly from an underground rootstock. These huge, very leathery, roughly diamond-shaped leaves are strongly pleated along their length and have stunning, silvery white backs. The Silver Joey is native to rainforests in Malaysia. It will grow happily in a warm subtropical climate and, of course, anywhere in the tropics, in a shady, wind-protected situation. The peach pit-sized seeds are much sought after. (RPS.com)