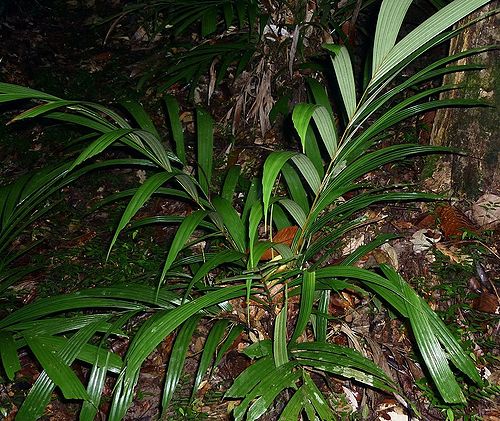 Beccari (1904) described how he found this species on Gunung Mattang: - "Here, too, I collected specimens of the largest known Calamus and of the diminutive Iguanura palmuncula, which is probably the smallest of known palms. Its four or five fronds which constitute the entire plant, and are about the size of a man's hand, are borne at the summit of a stem a few inches high and of the thickness of a goose-quill." He described two varieties: one has simple leaves ("forma typica") and the other has dissected leaves (var angustisecta). The type collections of those two varieties have the same collecting number suggesting that they are from the same population and the dissected leaved specimen shows a series of leaves from the scarcely dissected to the completely dissected leaves so that I regard these plants as belonging to a single taxon. (Kiew R. 1976)/Palmweb.