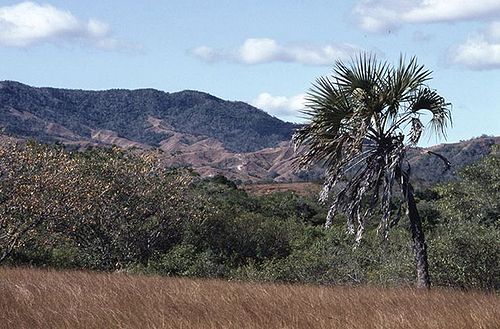 A common species at low altitudes in the West. This species occurs in continental Africa and some islands between Madagascar and Africa in the same habitat; it is one of the few palms which occurs both in Madagascar and elsewhere, but we believe it is native. (J. Dransfield and H. Beentje. 1995)/Palmweb.

In southern California this palm is slightly marginal when it comes to cold tolerance. Frosts tend to do significant leaf damage (less and less as plants age) even at 28 F, and may even defoliate young plants. However, if not frozen severely, these plants often recover even from a completely leafless state and sometimes from a rotten bud. The warmer the climate, the happier these palms are, and they perform the best in inland desert areas where temperatures often exceed 120 F in summers. However, they do survive, though are afflicted more frequently by bud rot, along the coast of southern California where temperatures rarely exceed 90 F, and several mature, trunking specimens are known. Fruiting is rare in these coastal individuals however. This is a full sun species and struggles sometimes if grown in partial sun. It is a slow growing palm in southern California taking up to a decade or more to form a trunk (trunks usually) with the possible exception of desert plants (much faster growth there). Most plants start out as individual plants but dichotomize early on long before a trunk is formed, usually right at ground level. Branching plants are unknown in California. In other parts of the US (Florida and Hawaii) this plant is a routine grower and very tolerant of copious rainfall, growing quite rapidly relative to its rate in southern California (with the possible exception of the desert regions). This species grows well even in marginal zones of Florida where frosts, or even freezes are frequent but not necessarily annual. Some grow this as an 'annual' knowing that someday a good freeze will come along and kill it, but some plants survive to maturity before this happens. Editing by G Stein

"Synonymous with H. natalensis now, this palm seems to be the most widely cultivated in the genus. This palm is unique in that it branches above ground level. It is cold hardy into the lower-mid 20s, making it popular throughout Central and South Florida. It is related to both the Bismarckia and Latania genera." (Christian Faulkner)

This African beauty forms a low, multi-branched trunk that starts forking at ground level. This, together with its rigid, costapalmate, blue-green leaves and orange, pear-shaped fruit, gives it a very distinctive appearance. In some areas of its large range it forms dense colonies; but in cultivation, it is still comparatively rare. It can be grown in tropical and warm temperate zones and favors a savanna-type climate with hot summers. Once established, its deep roots will search out underground water, making it extremely drought tolerant. It is the only species in the genus small enough for an average garden, and is also the most frost resistant in the genus. (RPS.com)