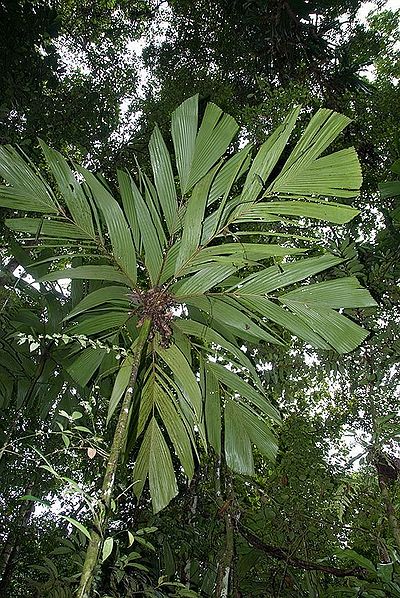 Notes:—Hydriastele dransfieldii is a moderately slender midstorey palm only known from the Biak Islands in western New Guinea. The species is highly distinctive vegetatively as well as in its reproductive structures. It has leaves usually consisting of three broad, multi-fold leaflets interspersed with a few single-fold leaflets and inflorescences branched to 1 order, which is unusual for Hydriastele inflorescences of more than 30 cm in length. The sepals of the pistillate flower are fused forming a conspicuous cup, and similarly the petals are fused at their bases. These features are known in only one other species, H. beguinii (Burret) Baker & Loo (2004: 62), from North Maluku Province, which is the sister taxon of H. dransfieldii (Loo et al. 2006). Previously, the two species were placed in the genus Siphokentia, which was subsumed within Hydriastele (Baker & Loo 2004). The two species can be separated based on multiple characters of the leaves and inflorescences (see Baker et al. 2000). PETER PETOE, CHARLIE D. HEATUBUN & WILLIAM J. BAKER Phytotaxa 370 (1) © 2018 Magnolia Press.

Conservation status:—Least Concern (LC). This species has a relatively narrow distribution (ca. 6,500 km2) but has been observed to be common in many parts of Biak (Baker & Heatubun 2012) and the AOO (20 km2) is no doubt a low estimate resulting from under-collecting. PETER PETOE, CHARLIE D. HEATUBUN & WILLIAM J. BAKER Phytotaxa 370 (1) © 2018 Magnolia Press.

Etymology: The species is named for John Dransfield (eminent English palm botanist) in recognition of his monumental contribution to the taxonomy of palms in Southeast Asia. (W.J. Baker, R.A. Maturbongs, J. Wanggai and G.G. Hambali. 2000)/Palmweb.