Found in the Norfolk Is. Grows naturally only on the Lord Howe Island group, in the Tasman sea 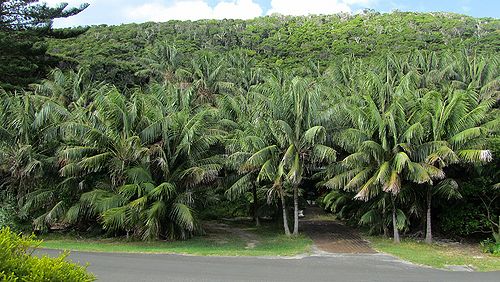 Howea forsteriana has a canopy of about three dozen gracefully drooping leaves which produce an airy and poised look. The leaves are pinnate (featherlike) and grow up to 12 ft (3.7 m) long with thornless 4-5 ft (1.2-1.5 m) petioles (leaf stems). The leaflets are like fingers, 2.5 ft (0.8 m) long and 2 in (5 cm) wide; they bend downward in a graceful fashion. Kentia palm leaflets are dark green on top and lighter green on the bottom. The mature spread ranges from 10-20 ft (3-6 m) across, and the height may range from 15-30 ft (4.6-9 m), and can reach 60 ft (18.3 m). The trunk is swollen at the base and has slightly raised annular trunk rings. The kentia palm produces an inflorescence about 3.5 ft (1.1 m) long which consists of white flowers on 3-7 spikes which are fused at their bases. Male and female flowers are produced in the same inflorescence. Mature fruits are dull red and egg shaped, about 1.5 in (3.8 cm) long. (Floridata.com) Editing by edric.

Kentia palms tolerate and adapt to a wide variety of soils including those that are neutral, acidic, clayey and slightly alkaline, but they perform best in rich loamy soil with excellent drainage. Kentia palms are traditionally slow growers, however regular fertilization with palm-grade fertilizer promotes maximum growth. A balanced (e.g., 18-18-18) slow-release palm fertilizer with minor elements should be used during the growing season. Magnesium and potassium nutritional deficiencies have been noted, particularly in older kentias. Mineral supplements should be administered in recommended amounts to prevent or treat such deficiencies. Kentia palms in pots or tubs can be left in the same container for many years due to their slow growth. Kentia palm can be attacked by spider mites, scale insects, Cylindrocladium leaf spot, stigmina and other fungal leaf spots. They are also susceptible to lethal yellowing disease.

The famous Kentia Palm from Lord Howe Island, off the east coast of Australia, hardly needs any introduction. It is considered by many to be the best house plant in the world. Tolerant of poor treatment and neglect, it will put up with low light better than almost any other palm. It is also an excellent landscaping plant that will do well in shade as well as full sun in most warm temperate/subtropical climates. It can take light freezes but does not like hot, tropical climates. (RPS.com).

Probably the most widely used and most popular "house plant" of all time, dating back to the Victorian ages in England, where it recieved it's common name of "Parlor Palm." Literally hundreds of millions of seeds/plants have been exported from Lord Howe for this purpose.

Phonetic spelling of Latin names by.