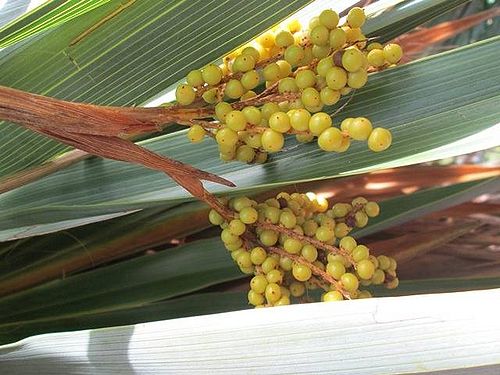 Ripe Fruit. Mogotes de Jumagua, Villa Clara, Cuba. Photo by Duanny Suárez.
This absolutely unique little treasure, survives only on three of the small mogotes, where it was rediscovered in 1978 by a Group of paleontologists and naturalists, looking for fossils in the caverns, and cataloging the fauna and flora of these small mountains (Sabaneque Speleological Group). A small number of less than 100 specimens, cling to the steep Limestone cliffs.

A seed collection picked in 1996 by specialists of Palmetum of Santa Cruz de Tenerife, resulted in various plants now growing in a handful of Botanical Gardens; specimens can be found growing at the Montgomery Botanical Center in Miami, Palmetum de Santa Cruz in the Canary Islands, Orto botanico di Messina in Italy, and The Jardín Botánico de Las Tunas, in Cuba. Until 2007 no commercial distribution of this plant was ever made, as in 2007 for the first time, seeds collected in the wild entered in the commercial seed trade, and reached many growers in various areas of the world.

Hemithrinax ekmaniana, Jumagua Palm: Probably one of the rarest palms on the planet, this absolutely unique little treasure survives only on three small mogotes, (heavily eroded karst limestone hills) in northern Cuba, where a small number of individuals cling to the steep cliffs, battered by high winds, and rooting in the porous rock with almost no humus. The Jumagua Palm grows a slender trunk to only 5 cm. (2 in.) in diameter which holds a perfectly spherical and very dense crown of stiff, spiky leaves that have almost no stalks, and therefore sit very close together. While it grows rather slow, requiring about 6 years until it starts forming a trunk, it is definitely well worth the wait for this outstanding miniature palm. It will do well in tropical and a number of warm temperate climates, given a position in full sun, and a very well drained soil. It can also take considerable coastal exposure. With the exception of a handful of plants in botanical collections, this species has not yet been introduced into cultivation. (Rare Palm Seeds.com)