Norfolk Is., specifically Lord Howe Island off Australia, where it grows in the moderate, 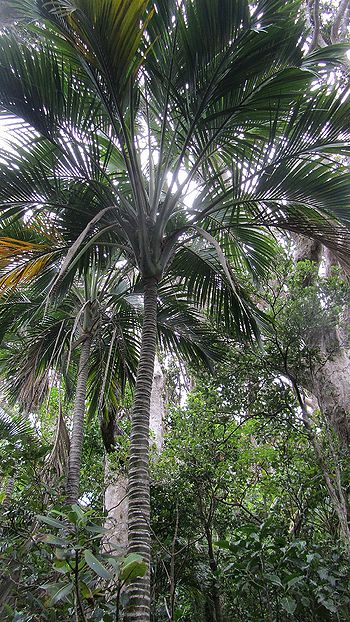 Mt. Gower Climb (Lord Howe Island) - Troy & Darold Petty's excellent adventure. Photo by Troy Donovan.
hilly rainforests, but not along the coast where most of the Kentia palms grow in massive palm forests.

This monoecious, pinnate palm grows to about 40'/12m tall and has a closely ringed green trunk about 6 inches/15cm in diameter. The leaves are striking and markedly recurved, nearly forming a half circle in their arching up, out and down. The leaves are quite long, but the width of the entire palm is much less than the doubled length of the leaves because of their extreme recurving. The leaflets grow up and out away from the rachis forming a pronounced 'V', in sharp contrast to the droopy, downward pointing leaflets of its cousin, Howea forsteriana. The inflorescences are unbranched, also in constrast to H. forsteriana, though the fruits are similar shape and color (dark red and ovoid). There is no crownshaft. Editing by edric.

Though supposedly unhappy in a tropical, warm climate, palms look extremely healthy and vigorous growing in the coastal Hawaiian rainforests. However, the palm looks perfect, as well, in a nearly frost-free Mediterranean climate. It is a significantly more difficult and touchy palm than H. forsteriana, growing more slowly (hence the crowded, closely spaced trunk rings) and being less tolerant of full sun, cold, wind and indoor situations. This palm is probably cold tolerant to around 28F/-2.2C, but will show leaf burn even at that temp if kept there for any length of time.