Special note: Until recently this species was known as Dypsis pilulifera, and is now unnamed once again, and is back to it's original name Dypsis sp. 'Orange Crush'. 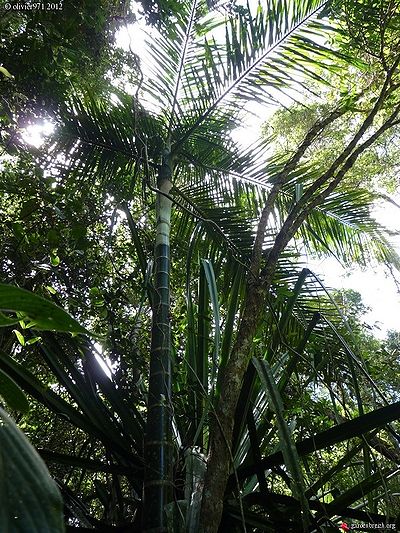 A robust Dypsis from Madagascar that forms a shuttlecock-crown of long, flat, shiny green leaves with countless, narrow leaflets that have beautiful drooping tips. The sturdy trunk holds a beautiful, tall crownshaft that is bright orange after each leafbase falls and then slowly fades to green. It adapts easily to cultivation in the humid tropical or frost free warm temperate garden. It has been suggested that Dypsis pilulifera is in fact Dypsis pilulifera, a species from humid submontane forest in central and northern Madagascar to nearly 1000 m (3300 ft.). (RPS.com)

A large and beautiful tristichous palm, virtually unknown until a few years ago, but found recently in several places. (J. Dransfield and H. Beentje. 1995)/Palmweb.

Conservation: Vulnerable. Though the populations in the Marojejy and Mantady occur within protected areas, the harvest of the palm-heart continues, with fatal consequences for the trees. (J. Dransfield and H. Beentje. 1995)/Palmweb.

There is also a green form, that gets no orange crownshaft when the old leaf sheath is removed, edric.

"Jeff Marcus wanted me to post the following updates to a couple of Dypsis ID mysteries that have changed and been confirmed. As a result of several visits to Jeff’s collection, and by using herbarium specimens, Dr. Dransfield and Jeff have the following information to share.

Jeff would like to express his appreciation to Dr. Dransfield, and feels fortunate that we have a taxonomist who cares enough to get things right in a very complicated genus like Dypsis. And to be open minded enough to base his scientific observations on information obtained from a private palm garden.

There is a palm that was known for many years primarily as Dypsis sp. “Orange Crush.” And several years ago the species name of Dypsis pilulifera was assigned to it. However, it has now been confirmed by comparing herbarium specimens at Kew, that this palm is not D. pilulifera. Apparently this palm will now again have to be considered as undescribed.

But all is not lost. The real Dypsis pilulifera has been found. The palm that has been sold by Floribunda for many years as Dypsis sp. ‘Jurassic Park’ has turned out to be D. pilulifera. This palm was also known in the trade for a time incorrectly as D. tokoravina.

Below is a photo of these two palms side by side in Jeff’s garden. The palm Jeff is standing next to is the “new” D. pilulifera (formerly “sp. Jurassic Park"), and the two palms to the right are the “newly (again) undescribed” Dypsis sp. ‘Orange Crush.’" (Dypsisdean) 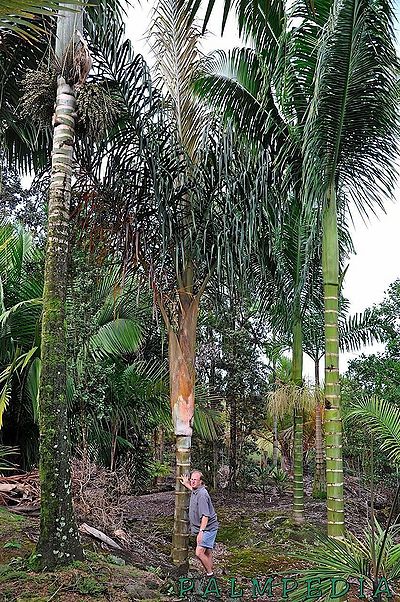 "First - in response to Neoflora whoever he/she may be, I must protest that job security doesn't come into it - I am retired after all! Our concern always, as taxonomists, is to work towards a stable, useful taxonomy that reflects relationships. But as humans (I think) we do make mistakes and furthermore, the goal posts are constantly moved as more and more material is introduced and comes to maturity. The material of Orange Crush that Bo sent does indeed closely resemble pilulifera in flowers and fruit but now I know the palm better in cultivation, it's clearly quite different from Jurassic Park (OK, you don't need me to tell you that). My task last week was to go through all the material in Kew looking at big canopy Dypsis specimens to see what Jurassic Park, material of which - and photos- I collected at Floribunda in February, most closely resembles. Another correspondent commented that problems probably arose by us looking at dried brown scraps in herbaria rather than living palms. BUT, the whole point is that the scientific name of a palm is authenticated by the type specimen - which in many cases may be a miserable scrap. It takes quite a lot of detective work to match up these scraps with modern scraps or modern well collected herbarium material. The type specimen of D. pilulifera was collected by Perrier de la Bathie in the 1920s. That specimen is in the Paris herbarium and in the University at Marseille. We have excellent life-sized photographic prints of the type and it was by comparison with that, and reading the original description that I have come to the conclusion that Jurassic Park is D. pilulifera. I am really confident about this. D. pilulifera, as treated in POM, may possibly contain some heterogeneous elements (our description may be too broad and include things that don't belong) but I am confident that the name pilulifera as I am applying it today is correct. Field botanists these days do take vast amounts of digital photographs (in answer to Mike in Kurtistown (oh, how I wish people used their real names on Palm talk). The value of digital photography has, of course, been long ago accepted by taxonomists. However, no amount of digital photography can improve historic scraps of dead brown 'hay' on which plant names are often based. What has helped me so much has been the opportunity to work with Jeff Marcus with his brilliant eye for species differences, to get to know the plants in cultivation, to as it were know them, and then to try to apply existing names. Where there is really no name and where I feel confident that we are dealing with a discrete taxon rather than variation within an existing taxon, then I will go about describing something as new. There are still more than a handful of big Dypsis in cultivation that defy naming at present and an equal number of really well collected modern specimens from the wild that await naming." Dr. John Dransfield)