Endemic to Northeast Madagascar, apparently quite common. Coastal lowlands and 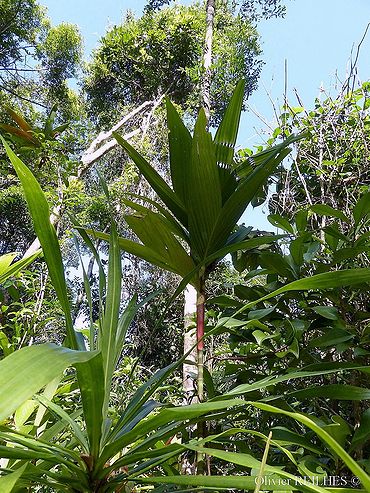 Our interpretation of D. hirtula differs from that of Beccari (1910) and Jumelle and Perrier (1945). The holotype of D. hirtula is an unnumbered Poivre collection in the Jussieu Herbarium in Paris. Vegetatively this specimen fits within the range of variation of D. forficifolia. The inflorescence, however, is branched to three (very rarely four) orders and the rachillae are slender, bearing scattered dark brown laciniate scales and rather distant triads. Viewed in isolation the types of D. forficifolia and D. hirtula thus appear rather different and can be differentiated using the character of rachilla scaliness utilised by Beccari. However, with the wide range of material now available, illustrating considerable variation in D. forficifolia, it is no longer possible to make a clear distinction and we have concluded that D. hirtula represents one extreme of the variation of D. forficifolia. We have not been able to examine the Majastre collection illustrated by Beccari (1910) as D. hirtula but we suspect that this is D. viridis. Perrier 17466, cited in the Flore de Madagascar as D. hirtula and used as the basis of the illustration, is, we believe, D. viridis(q.v.). We have also included D. masoalensis in synonymy with D. forficifolia. Jumelle described the former as differing from the latter in the presence of laciniate rachilla bracts and hairs on the rachillae, and the presence of up to six leaflets on each side of the rachis. The leaf of D. masoalensis fits within the range of variation of D. forficifolia and the rachillae, similarly, in D. for ficifolia can vary from being glabrous to with very sparse caducous laciniate scales and the rachilla bracts from being entire to sparsely laciniate. D. littoralis fits within the range of variation of D. forficifolia and so is included here too. Plants from near Ambanizana, Masoala Peninsula, tend to have inflorescences branched to three rather than two orders with rather slender and very numerous more or less glabrous rachillae. Dypsis forficifolia var. reducta has staminate flowers with six stamens with didymous anthers, so clearly does not belong here (see under D. schatzii). (J. Dransfield and H. Beentje. 1995)/Palmweb.

A slender solitary or clustered palm of the forest undergrowth. This is the commonest small palm of the forests of the northeast. It is very variable and, as can be seen from the list of synonyms, we are including within its range of variation species that have in the past been recognised as distinct. It appears to flower and fruit abundantly and so there should be little difficulty in obtaining seed. It would certainly make a very handsome ornamental. It could be confused with D. ambilaensis but differs in the position of the three stamens (see under D. ambilaensis). The species name is derived from the Latin for a pair of shears or scissors, presumably in reference to the forked leaves, reminiscent of an open pair of shears. (J. Dransfield and H. Beentje. 1995)/Palmweb. Conservation: So widespread in the northeast of the island as to be at present not threatened.

One of the most common small understorey palms from the humid, tropical northeast of Madagascar, this small solitary or clustering palm grows thin stems to about 4 m (13 ft.) tall. The small crown consists of only a few bifid or sparsely pinnate leaves. (RPS.com)