Endemic to Madagascar. Mid-slopes and in valley bottoms, at elevations of 300-600 m above 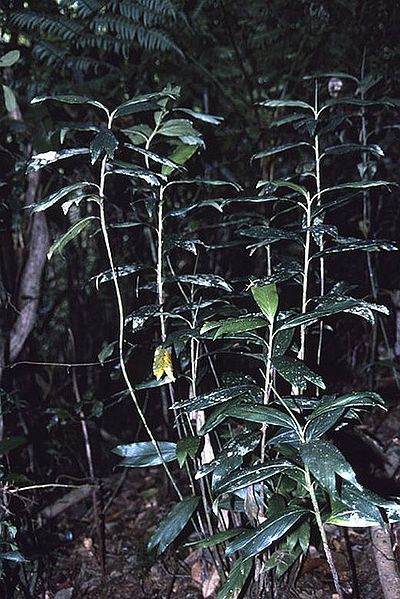 The palm we describe here and name as Dypsis delicatula has already been illustrated, as D. hirtula, in Beccari (1912-1914) and in Jumelle and Perrier de la Bathie (1945). Dypsis hirtula was described and named by Martius, based on a collection (Poivre s.n.) in the Jussieu Herbarium in the Museum d'Histoire Naturelle in Paris. In Dransfield and Beentje (1995), D. hirtula was discussed at length and included in synonymy with D. forfidfolia Noronha ex Mart. In 'Palme del Madagascar', Beccari (1912-1914) had interpreted D. hirtula differently, accepting it as a species distinct from D. forficifolia. He illustrated the species, not with a photograph of the type, but instead with a photograph of a collection made by Majastre in Tamatave, preserved in Hamburg herbarium. This D. forficifolia (syn. D. hirtula). However, the identity of the Majastre collection has no bearing on the nomenclatural problem, as it is not the type of D. hirtula. Jumelle and Perrier de la Bathie (1945) accepted D. hirtula as a distinct species, probably basing their concept of the species on Beccari's illustration of the Majastre collection, and illustrated it with a habit drawing based on Perrier 17466, collected at Betampona; the taxon illustrated is clearly the taxon we describe here as new. They do not appear to have examined the holotype of D. hirtula, and we suspect, also, that they did not dissect the flowers of Perrier 17466. The position of the stamens is crucial to identifying the species of Dypsis with three stamens. In the informal classification of Dransfield and Beentje (1995), taxa with stamens opposite the sepals belong to either Majastre collection, not traced by Dransfield the sepals; however, unusually, he does not and Beentje, bears a remarkable resemblance indicate which collection provided the to the palm we describe here. Beccari also material for his analytical drawing. Dransfield described and illustrated the staminate flowers, and Beentje suggested that the Majastre clearly showing the stamens to be opposite to collection was more likely to be D. viridis than Group 12 (Dypsis sensu strictu), Group 13 (Adelodypsis) or Group 14 (group without a previously published name), while those taxa with stamens opposite the petals belong to Group 18 (Trichodypsis). The Betampona taxon has stamens opposite the petals and thus its affinities are with taxa such as D. viridis, D. hildebrandtii, D. mocquerysiana etc., while the type of D. hirtula (= D. forficifolia) has stamens opposite the sepals. Whatever the identity of the Majastre collection, the Betampona dwarf palm is clearly in need of being described and named. (Britt, A. and Dransfield, J. 2005)/Palmweb.

A wonderfully delicate new species of Dypsis, hence the species epithet. Britt was aware of this palm being widespread in the forest under-story whilst working at Betampona from 1997-2002. Baker and Dransfield visited Betampona in 1999 and made a collection of it; however, at the time of their visit only dead inflorescences were available. Britt was able to collect in 2000, but his collections remained in Madagascar until additional material was collected in 2003 and finally shipped to Kew. Britt also located this species in further forest fragments around the Betampona area. Thus it appears to have very restricted distribution in the remnants of low-altitude rain forest in the Betampona region, northwest of Toamasina. (Britt, A. and Dransfield, J. 2005)/Palmweb.

Conservation: Vulnerable (IUCN Redlist). Known only from Betampona but is relatively common in the understorey; about 300 clumps are estimated to exist. Access to the area is difficult and with the whole population being inside a reserve this helps reduce its risk of extinction. The species is therefore listed as Vulnerable based on the small population size. However, should human pressures on the reserve increase, the status of this species would need re-evaluation.

A very pretty thin dwarf palm, clustering, thin stems, just reaching a little over a meter tall with tiny dark green shiny leaves, the point briefly bifid. It is found in the undergrowth of tropical forests northeast of Madagascar, between 300 and 600 m. Dypsis delicatula would make an outstanding ornamental in the tropics and a beautiful potted plant but does not seem to be present in culture. (RPS.com from the French.)