Dypsis boiviniana is endemic to Madagascar. Mananara, Soanierana-Ivongo and Sainte-Marie; 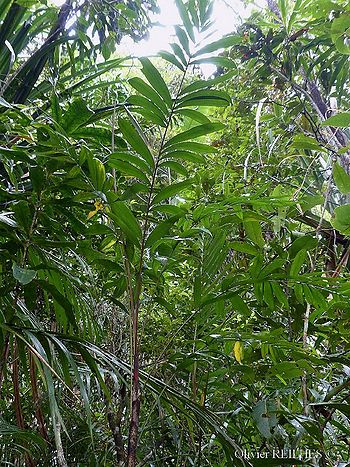 The application of the name Dypsis boiviniana has caused considerable problems for all who have written about the palms of Madagascar since the time of Baillon. The name was published by Baillon (1894) for specimens collected by Boivin on Î;le Sainte-Marie at Ravin-tsara in 1850. Specimens of two species were mixed together as a single gathering, either in the field, or, more likely, back in the herbarium. At any rate, Baillon describes D. boiviniana as a palm with irregularly arranged linear-lanceolate pinnae and an inflorescence branched to one order with about six rachillae, and with male flowers that contain three stamens. The type in fact consists of two different leaves and two different inflorescences which are, however, similar enough to explain Baillon's mistake. There is an entire inflorescence, branched to one order, with male flowers with six stamens; and there are three partial inflorescences closely resembling the former, but carrying flowers with three stamens, and bases showing that they are actually part of an inflorescence branched to more than one order. The leaves are also different: there are parts of a pinnate leaf with regular leaflets (see Beccari 1912, 1914, plate 17) and a complete pinnate leaf with grouped leaflets (see Beccari 1912, 1914, plate 44). Beccari felt that the latter belonged with the entire inflorescence branched to one order, because the leaf sheath and lower part of the inflorescence fit; he thought that the parts of the regularly pinnate leaf might go with the partial inflorescences, but of course this is more difficult to prove. Beccari retained the name Dypsis boiviniana for the partial inflorescence with 3-staminate flowers, together with the regularly pinnate leaf; for the inflorescence branched to one order with 6-staminate flowers and the grouped leaflet leaf he established the name Chrysalidocarpus oligostachya. However, we believe that Beccari's interpretation of Baillon's name to be incorrect. Lectotypification should be based on the specimen that most nearly matches the protologue. Except for the number of stamens, Baillon's protologue of D. boiviniana describes in perfect detail the leaves and inflorescence of the specimen that Beccari later separated as the type of Chrysalidocarpus oligostachya. We therefore lectotypify D. boiviniana on the inflorescence with few thick rachillae of the first order and leaves with fascicled leaflets, and exclude the inflorescence fragments that represent slender rachillae of the second order that bear a covering of hairs (i.e. the fragments that Beccari interpreted as the type of D. boiviniana). Thus Chrysalidocarpus oligostachya and Neophloga oligostachya become synonyms of Dypsis boiviniana. Dypsis boiviniana in Beccari's interpretation is an altogether different species which we have named D. paludosa (q.v.). Beentje et al. 4638 differs from the other two specimens, that agree perfectly with the type, in the leaflets which are fewer in number, much longer (and the median ones much narrower as well) and in having clustered stems, while the other two collections seemed solitary. Two specimens (Perrier 12051 and 12090) from the Mananara River (both at P) are reminiscent of this species, but the leaflets are regular. The inflorescences are in a very young stage and branch to two orders. (J. Dransfield and H. Beentje. 1995)/Palmweb. Editing by edric.

This is a palm of forest undergrowth in the lowlands of NE Madagascar, particularly around the Bay of Antongil and on Île Sainte-Marie. Based on a mixed gathering made by Boivin last century on Î;le Sainte-Marie, there has been a certain amount of confusion over this species. As interpreted here, it is an attractive palm with solitary or clustering erect stems and neat leaves with grouped leaflets and inflorescences branched to one order only. Together with D. sanctaemariae, D. pervillei, D. soanieranae, D. curtisii and D. mangorensis it forms a group of apparently closely related species; it is distinguished by the rather thick rachillae with crowded triads that are partially sunken in pits. We do not know whether D. boiviniana is in cultivation. The name refers to the collector of the type, Louis Hyacinthe Boivin (1808-1852). (J. Dransfield and H. Beentje. 1995)/Palmweb.

Conservation: Endangered. An estimated fifty individuals in three sites, only one of which is protected, and most of which are under threat. (J. Dransfield and H. Beentje. 1995)/Palmweb.

A smallish palm from the undergrowth of lowland rainforest in northeastern Madagascar, with solitary or clustering canelike stems, each topped by a small crown of ascending, bright green leaves with neatly grouped leaflets. Like so many Madagascar palms, it is highly endangered due to the destruction of its forest habitat. (RPS.com).