Madagascar. Dypsis bejofo is only known from Maroantsetra and Mananara, around the 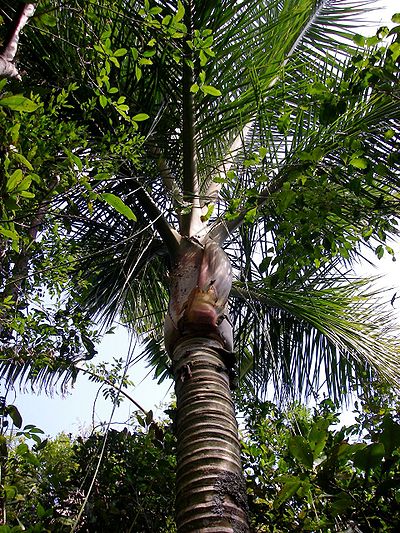 This palm has been unavoidably confused with a more widely available cultivated palm, invalidly named when it was originally introduced, as Dypsis bejofa, This imposter is now being referred to more correctly as Dypsis sp. 'Bejofa'. But because of this similarity, the confusion continues. The differences are apparent, but the confusion will persist until the Dypsis sp. "Bejofa" is described and/or identified.

Still relatively uncommon in cultivation, and as yet not 100% positively identified as such. However, the palms tentatively identified as the "real Bejofa" have been extremely slow growing, even in the optimum growing conditions of Hawaii. Cold Hardiness Zone: 10a

One of the most impressive palms of Madagascar. The massive trunk and enormous leaves, sometimes arranged in three rows in an arching crown, give this tree a majestic appearance. This would be a spectacular ornamental tree for grand landscaping in the tropics. Seeds have been widely distributed. The local name has supplied us with the specific epithet. (J. Dransfield and H. Beentje. 1995)/Palmweb.

Conservation: Endangered. Only known from two sites, where numbers are low. The following quotes are illustrative of some of the previous confusion, hopefully straightened out above. They remain here to help deliniate the path to correct IDs that has taken place over the years.

"This is one of the rarer palms from Madagascar, but it is slowly making its way into cultivation. I have been able to keep one alive in zone 9b, but don't think that's really in this palms best interest. It is a semitropical species that develops a massive crown and tall, thick trunk. However, no know adults outside Madagascar at this time, and since I haven't been to Madagascar, it will be some time before I can post a photo of a mature plant. Great fuzzy orange-brown color on the new spike and leaf bases. Large, relatively wide leaflets... very ornamental seedling."

"I have some photos of larger, flowering seedlings in Hawaii, and now there is some questions as to what this palm really is.. and it may not be but another few years before it will finally be officially described and named. Turns out the 'true' D bejofo, as Cfish mentioned below, is a different looking palm... less robust and with plumose leaves. I have added this one to the plant files now, but only have one pic of it. Soon this one will be reclassified but until then, it will be referred to as Dypsis sp. Bejofa- since it so many think it was bejofo, guess they decided to keep the name similar to keep the confusion down a tad." (Geoff Stein).

"There are two, possibly three variations of D. bejofo being sold currently. There is a broadleaf, regularly pinnate version as shown in the pictures provided. There is as well a plumose version that has irregularly spaced leaflets - this is known as the true bejofo as shown in habitat pictures. I took no pictures of this plant, but it is very "alien" looking." (Christian Faulkner).

Dransfield, J. & Beentje, H. 1995. Palms of Madagascar. Royal Botanic Gardens, Kew and The International Palm Society. Many Special Thanks to Ed Vaile for his long hours of tireless editing and numerous contributions.