As with this entire genus, Dypsis albofarinosa grows naturally on the island of Madagascar. 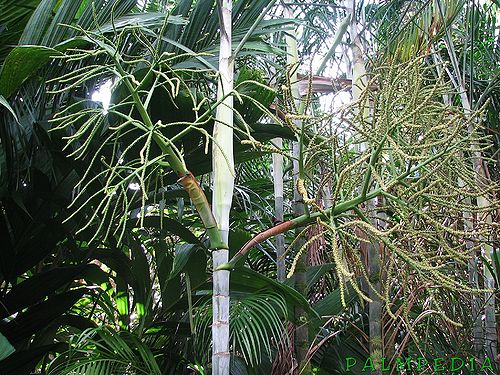 Big Island, Hawaii.
The exact area or range is unknown.

Before this palm was described in 2003 by Don Hodel, it was sold by Jeff Marcus of Floribunda Palms as Dypsis sp. 'white petiole,' due to the juvenile's trait of a new spear with a white petiole. It was from Jeff's parent plant (adjacent photos) that the description was accomplished. This slender graceful palm is definitely in the D. baronii complex, and looks like a cross between the weeping form of D. onilahensis and D. baronii, with powdery white crownshaft and slightly drooping leaflets. It differs from most forms of D. baronii with it's more slender stems, and from the weeping form of D. onilahensis with less drooping of the leaflets and slightly less white on the trunk and stem. The stems range between 1.5-2.5 in./3.8-6.4 cm. and may be up to 15 ft./4.5 m. tall.

The cultural requirements could also be descibed as being a cross between D. baronii and onilahensis. That is, more drought tolerant and cold hardy than D. baronii, yet less on both counts than D. onilahensis. As with most in this complex, some shade as a juvenile and full sun in most climates will suit it best. This species is an extremely attractive palm that is now readily available, and should be given a try by all those who appreciate a cute clustering palm, tolerant of a variety of climates, that will fit into a moderately sized location. Cold Hardiness Zone: 10a

Growers and collectors have long recognized that several undescribed and unnamed species of cultivated palms originating from Madagascar, mostly Dypsis, were not included in John Dransfield and Henk Beentje's monumental work, The Palms of Madagascar, when it was published in 1995. Hawaii palm grower Jeff Marcus was aware of one of these unnamed species growing in a private garden in Hilo, Hawaii and he had dubbed it Dypsis 'stumpy'. Marcus and others had distributed seeds and seedlings of Dypsis 'stumpy' and, because it had become fairly well known to palm collectors, Dransfield and Marcus described and named it D. carlsmithii in 2002 in honor of the late Donn Carlsmith in whose garden it was growing. Now Marcus has brought to the attention of palm collectors another new Dypsis, this one growing in his own nursery near Hilo, Hawaii. It is an especially attractive and highly ornamental Dypsis with clustering stems and powdery chalky white crownshafts. Because Marcus has widely distributed seeds and seedlings, it is appropriate to describe and name this handsome new species. (D. Hodel and J. Marcus. 2004)/Palmweb.

D. albofarinosa, the clustering White Powder Dypsis, was found in cultivation before it was known in habitat. That occurred around 1990, when a number of seedlings grown from a batch of seeds purchased as D. baronii turned out to be a different, unknown palm. This new species was first described just over 10 years ago. By the time later on when it was finally discovered in the wild, in a very small area of inland eastern Madagascar, fewer than 20 mature specimens were found. A powdery-white wax coating (indument) on its crownshafts – and briefly on its upper stems – makes it a striking ornamental. It also has attractively-arched leaves with long, thin, drooping leaflets. A slow grower, its stems at maturity can reach 15 ft. in height and 1½ to 2 in. in diameter. Its IUCN Red List conservation status is Critically Endangered, with a decreasing population trend. Often a species’ decline in habitat is attributed to urbanization or land clearing for farming. However, according to the IUCN, the threat to D. albofarinosa is “due to the impact of seed collectors.” This is, of course, not the first time that the passion to satisfy an overseas market has jeopardized the existence of a plant species. (fairchildgarden.org)

An exciting new species from Madagascar that was newly described only in 2003 by botanist Don Hodel and legendary palm grower Jeff Marcus. Similar to D. onilahensis and D. baronii, it has slender, branching stems and drooping, dark green, pinnate foliage and a distinctive, powdery white crownshaft, making it one of the most exciting new introductions in Madagascar palms. (RPS.com).