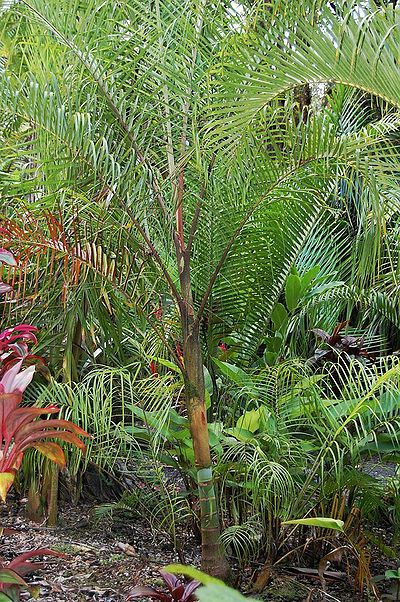 "I am 99% convinced that the plants sold in California and Hawaii are the same as sp. 215. The appearance is very similar. 215 is fuzzier and more colourful, but this may just be a variation." (Daryl O'Connor 2011)

"However, the other 1% says that these may be two similar palms that just exhibit very similar traits. I have other Dypsis that have the same type of leaf, but different stems and colour. I mean, who knows with Dypsis???" (Daryl O'Connor 2011)

"Apparently the seed was collected in the wild, and the photo of the parent plant is in the other thread. My plant has produced three inflorescenses on two stems, but nothing has eventuated so far, unfortunately. The largest stem has about 8ft of wood, but is obscured by the foliage of all the other plants around it. If it was out in the open is might have a better chance at getting pollinated." (Daryl O'Connor 2011)

"Mine has always had the fine pinnate leaves too. However, the rest of the features do key out to that in POM except for number of stems...mine now has 16." (Daryl O'Connor 2012)

"At first I doubted that my Dypsis heteromorpha was one in the same as Daryl's D. sp. 215, but the older it gets, the more fuzz it shows. Also, the striation lines on the crownshaft are pretty distinct. It has a tristichous arrangement, heavy ramenta near the petiole, it's densley suckering....I think they are the same palm now. I can only hope that someday mine will have as much red fuzz as Daryl's. One thing I've noticed is that the red fuzz rubs off very easily, similar to a triangle palm." (Matty Bradford 08/2011)