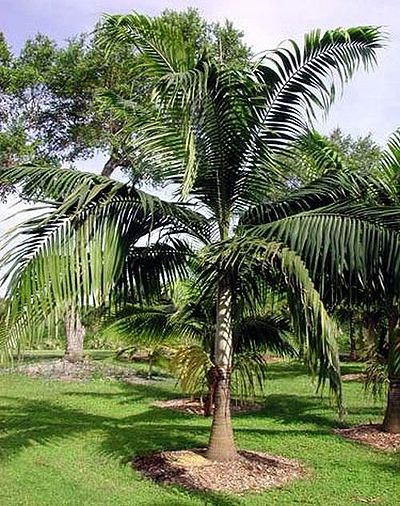 Photo-toptropicals.com.
the Mascarene Island of Rodrigues.

The ringed trunks are solitary at 15 cm in diameter with a slight bulge at the base, occasionally reaching up to 12 m in height. The crownshaft is over a meter tall, swollen at the base, and covered in white wax— which has given the palm its epithet album— and small, matted brown hairs, producing a rounded leaf crown 4.5 m wide and 3 m tall. The 2.5 to 3 m leaves are borne on short 30 cm petioles; the arching leaflets are pointed at the apice, from 60 – 90 cm, dark green in color when mature,This variety has has a noticeable yellow/orange colouration to crownshaft, and petiole, and a red-orange-brown new leaf, leaves emerge from the rachis in a single plane. On flowering, they produce up to six inflorescences which ring the trunk below the crownshaft, branched to one order, with white to yellow flowers, which are male and female; both pistillate and staminate flowers have three sepals and three petals, the former being smaller than the latter. The ovoid fruit ripen to purple or black in color, containing one brown, ellipsoidal seed. Editing by edric.

"Almost looks like the one from Mauritius (princess palm), but in fact the trunck is thinner and take longer to be mature and bear flowers and fruit. But the most the noticeable difference is the young leaves are light brown to orange. Can be seen growing in Mauritius quite commonly and being sold in nurseries sometimes as Palmiste (a venucular name to Dictyospermas Palm heart's which is consume in salads in the Mascarenes Islands)." (timrann), edric.

A tall growing, attractive palm from tiny Rodrigues Island, far out in the Indian Ocean. It has a prominent, pale crownshaft and a bright yellow or orange leafstalk and leaf-midrib. It grows fast given a sunny position and adequate water and feed, and will succeed in tropical, subtropical, and some warm temperate areas. The Rodrigues Hurricane Palm can also take considerable coastal exposure. (RPS.com), edric.