Daemonorops fissa is endemic to Borneo. Widespread throughout the lowlands of Brunei; 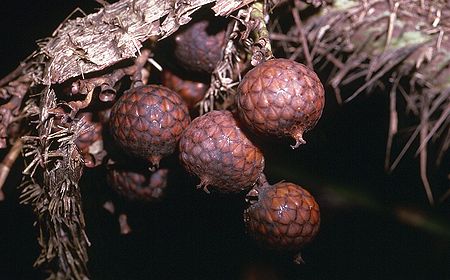 Keresa, Sarawak, Malaysia. Photo by Dr. John Dransfield, Royal Botanic Gardens, Kew/Palmweb.
rare in the uplands. Elsewhere throughout Borneo. D. fissa is common in disturbed lowland sites, being particularly frequent in secondary forest on alluvial sites; however it does occur in the hills up to 850 m altitude. (J. Dransfield. 1997)/Palmweb.

Clustering moderate to robust rattan palm, climbing to 30 m, frequently producing thickets; stem without sheaths to 25 mm in diam., with sheaths to 35 mm in diam., internodes to 20 cm or more; white latex exuding from cut surface. Sheath dull greenish-brown, rather densely armed with shiny flattened black spines, 10-20 mm long, solitary or grouped, brown indumentum abundant between the spines; knee conspicuous armed as the sheath; ocrea inconspicuous. Leaf cirrate, to 3.5 m including the petiole to 40 cm and cirrus to 1 m; petiole usually armed with groups of short triangular spines along the margins; leaflets about 80-100 on each side of the rachis, close, regular, narrow, the longest to 40 × 1.5 cm, bristly along the margins and up to 5 nerves on upper surface and along the mid nerve on the undersurface. Inflorescences usually produced in abundance, stiffly erect at anthesis, to 50 cm including the terminal beak to 20 cm, all inner bracts enclosed within the outermost, the tips of the inner bracts included within the beak, bracts usually persisting though splitting longitudinally, very rarely disintegrating, outermost bract usually heavily armed with spines similar to those on the sheath and abundant indumentum. Mature fruit spherical, to 20 mm in diam., tipped with a short beak to 3 mm, and covered with about 15 vertical rows of cinnamon-brown scales with darker margins. Seed rounded or slightly depressed, about 13 mm in diam.; endosperm deeply ruminate. Seedling leaf pinnate with about 6-8 leaflets on each side of the rachis. (J. Dransfield. 1997)/Palmweb. Editing by edric.

This is the only species which we recognise in Borneo belonging to the group defined by Furtado as section Cymbospatha. In Peninsular Malaysia it is possible to recognise eight taxa within this section, but the whole complex is a difficult one; there does seem to be less variation in Borneo than in Peninsular Malaysia. Until this section can be revised throughout its range, it seems best to retain the name D. fissa for the Bornean plant. This is an easily identified species as it is the only one in Brunei with an inflorescence in which all the primary bracts are enclosed within the outermost and remain so. (J. Dransfield. 1997)/Palmweb.

Uses: Produces a coarse medium-sized cane; the apex can sometimes be found for sale as a vegetable. (J. Dransfield. 1997)/Palmweb.