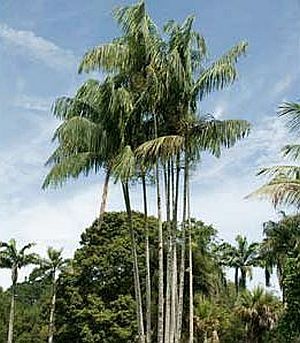 Cyrtostachys bakeri, is a spectacular canopy palm, that was discovered in Papua New Guinea, by Kew’s Head of Palm Research Bill Baker, and his local collaborator Roy Banka in 2000. This species produces clumps of towering trunks, that can reach 25 m. in height. Its flowers are produced on colossal spreading inflorescences, though the flowers themselves are minute. The new species was officially described in 2009 by Charlie Heatubun, an Indonesian palm expert and long-time collaborator of Kew’s palm team. This palm is one of many new discoveries, being made by Kew botanists and their collaborators, as part of the ongoing Palms of New Guinea project. Dozens of new species of palm are being discovered, in this, the largest tropical island in the world.

The conservation status of this palm is not sufficiently known. In the site of discovery, very few individuals were observed, with some other individuals remaining in grasslands from which forest had previously been cleared. More population and distribution data are required, but the primary threat is habitat degradation due to deforestation and mining activities in the area.