Cryosophila williamsii is confined to a small area in west-central Honduras, part of the 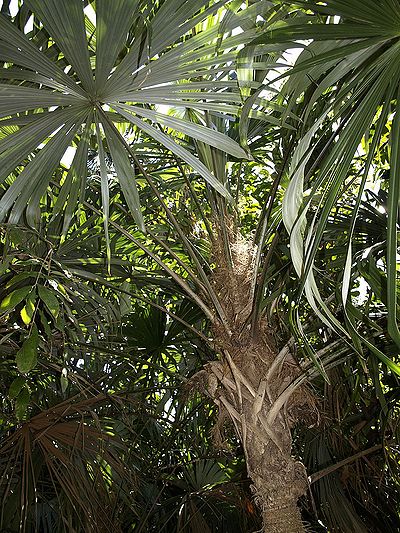 Photo by Dr. Scott Zona/Palmweb.
Mesoamerican Hotspot. It is restricted to steep, high-rainfall slopes of the Lago Yojoa watershed at ca. 650 meter elevation. The substrate is limestone. Until recently, the area supported dense rain forest.

Cryosophila williamsii is a solitary costapalmate fan palm, growing up to 7 meters (23 feet) tall. The lower trunk bears root spines, which are characteristic for the genus. Each leaf bears a deep central division, and segments are grouped into sections each containing 3–6 segments. The inflorescence is ascending, with a dense covering of 5–9 peduncular bracts monoecious (the flowers are bisexual). The fruits are globose, or ovoid and creamy white. Editing by edric.

Moist, well drained, semi-shaded area in the tropics/sub-tropics. Since they come from limestone areas, they like an alkaline soil. Hardiness: USDA zone: 9b

Little is known of the natural history of this rare palm. It was formerly used for thatch and hearts-of-palm, but nowadays, it is too rare to be a useful source of thatch. Harvesting for hearts-of-palm, may occur occasionally. The pollination biology of C. williamsii has not been studied, but pollinators are assumed to be beetles, as is known for related species, which are also known to have thermogenic inflorescences. Agents of seed dispersal are unknown. Deforestation is the single greatest threat to survival of Cryosophila williamsii, and indeed, the entire biota of the Lago Yojoa watershed. Cryosophila williamsii seedlings, require moist shade in which to establish and grow; seedlings cannot tolerate exposure, like the kind that occurs, after heavy slash-and-bun deforestation. In addition, continued extraction of C. williamsii for hearts-of-palm, is unsustainable and is contributing to the current conservation crisis surrounding this palm. Although the Lago Yojoa watershed, was designated as a forest reserve in 1971, forest clearing by local farmers continued unabated. The greatest hope for Cryosophila williamsii, lies in an ex situ collection at Fairchild Botanical Garden, Miami, USA. Seeds were collected from the type locality in January 1994. The palms began flowering for the first time in 2005. The type locality in Honduras, should be re-surveyed to see if the species is truly extinct. Evans (1996) noted that reproduction and seedling recruitment were abundant, so young palms (to small for harvesting of hearts-of-palm) may still persist. A local public awareness campaign, to prevent overharvesting might be effective, especially as alternative fast-growing hearts-of-palm crops (such as Roystonea regia) can be substituted. The ex situ collection at Fairchild Botanic Garden, could be used for germplasm production, however, it is not known if this species will set fruit in cultivation (i.e., without presumed beetle pollinators). Hand pollination may be necessary. If seeds can be produced from cultivated plants, reintroductions (following the successful protocol of Maschinski & Duqusnel) should be attempted. Additional ex situ collections should be established in botanical gardens in Central America.