Cryosophila warscewiczii is found in Costa Rica, Nicaragua, Panamá, and Belize, no doubt 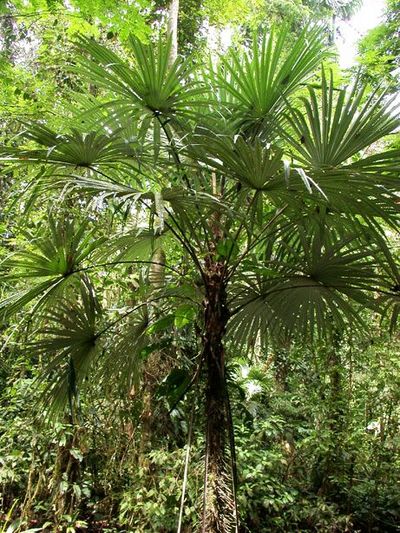 Hight to 10 m. tall; trunk 10-15 cm. in diam. above the en­larged base, much of the trunk bearing spines, at least when young, the spines are simple or branched, 16 to 35 cm. long, sometimes restricted to the base on older plants. Petioles longer than blade, broadly canaliculate; blades round in outline, 1.5-2 m. in diam. or more, palmately veined and irregularly lobed, almost to base, lobed completely to base on the lower margin, green and glabrous on the upper surface, densely whitish-pubescent on the lower surface, the trichomes so small and appressed, as to appear glaucous (sometimes arachnoid with brown trichomes on veins); juvenile blades triangular in outline, deeply 2- or 3-lobed (more in age), densely arachnoid-pubescent. Inflores­cences interfoliar, nodding, the spathelets (nodifronds) short, acuminate, densely woolly on outside, ultimately deciduous, the outer ones coriaceous, the outer most usually bearing 2 keels, the inner ones longer, each sub-­tending a branch of the spadix, 15 to 30 cm. long, closely enveloping at least the lower part of the branch; spadix branches at least as long as broad, 30-75 cm. long, the main axis stout, the branches very short 30 cm. long, densely flowered; flowersbisexual, 3-parted, gla­brous; sepals oblong; petals broadly obovate to rounded, concave, 2.5-4 mm. long, the margins thin, thesepals and petals stiff, erect, forming a narrow tube; stamens 6; filaments in pairs, flattened, broad and united at base, slightly longer than petals and cernuous near apex; an­thers 1 mm. long, pendent on outside of corolla just above apex; pistils 3, narrowly ovoid, long-tapered to apex, curved outward just above apex; stigmas held just above throat of corolla. Fruits round to obovate, mostly 1-2 cm. in diam., smooth, fleshy and white at maturity; peri­carp thin; seed 1, round, 8 mm. or more in diam.

Common in some areas of the younger forest, especially on the east side of the island. Flowers from May to Octo­ber in Panama (as late as December elsewhere in Central America), chiefly in August. The fruits develop in 2 to 3 months, mostly between August and December. Popula­tions may flower twice in a year; those seen in flower in October, had mature-sized fruits as well.

Recognized by the palmate leaves, the whitefleshy fruits, and the branched spines on the trunk, which Bailey(1943), considered to be root thorns. Cryosophila albida, and C. guagara, cannot be considered distinct from C. warscewiczii, since key characters such as pubescence and fruit size are very variable.

This palm is susceptible to hot, dry winds, but has some good frost tolerance, as well as tolerance of low light situations, making it an excellent indoor palm, and fast growing. It seems totally resistant to spider mites, which are the bane of most indoor palm species. Hardiness, USDA zones 9b-11, tolerates 26 F.

This beautiful and charming, medium sized fan palm from Central America has curious roots-transformed-to-spines that cover the slender trunk. The soft leaves are dark green above and silvery-white below and form a compact crown. Elegant and attractive, essential in the palm collection, excellent for the subtropical and tropical garden and one of the few fan palms that really do well indoors.