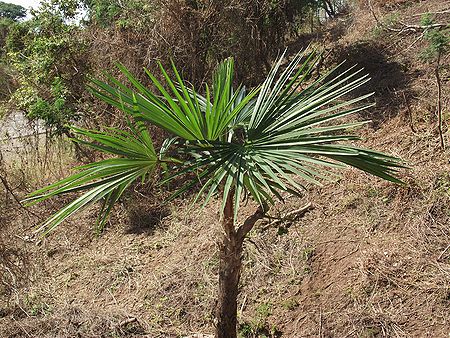 A little-known Cryosophila that is native to dry deciduous forest and coastal scrub as well as pine-oak forest between nearly sea level and 1700 m (5600 ft.) elevation along the Pacific coast of Mexico from Chiapas all the way north to Mazatlán, Sinaloa. It forms a slender, only mildly spiny trunk, rarely to 5 m (16 ft.) tall, which holds a neat crown of very glossy green leaves with narrow, fexible and beautifully arching segments. Editing by edric.

C. nana is probably the only species in the genus that will grow well in warm temperate climates but, despite being fairly common in the wild, is still practically unknown in cultivation. Plants grow equally well in sun or shade and can handle coastal conditions as well as some cold.

Conservation: Subpopulations have become scarce or have completely disappeared at lower elevations. In relatively undisturbed areas in upper altitudinal limits, the species can be common.

Cryosophyla nana was described since 1816 ("1815") and H. nana Corypha B. K., of material from Guerrero. It is a species of the genus easily distinguishable in a sterile condition, for having the highest number of unique characters, and their leaves do not split from the base, only an order of division of the lamina, abaxial pubescence and the dense network of short spines rizoidales on the trunk. In addition to its distribution restricted to drier environments on the Pacific slope, is the only species found above 1200 meters (Evans, 1995). C. nana is sometimes found in nurseries in the United States. (Berber). (From the spanish)