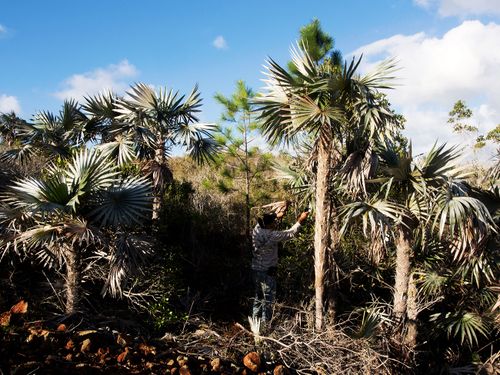 The species has somewhat glaucous green leaves. There is a variety referred to as sp. "azul" with blue leaves that is often considered to be a form of C. macroglossa. (Michael Merritt) Editing by edric.

One of the most exciting novelties from Cubas extraordinary flora, a few populations of Coccothrinax macroglossa in Camagüey exhibit a most magnificent leaf color, a dense, shiny white silver below and a steely blue, waxy silver above. It easily rivals the color of the great silver Bismarckia, and makes the palm one of the few with a silver/blue leaf that will grow well in the tropics. It can also manage warm temperate conditions as long as it is not exposed to more than an occasional light freeze. It is quite resistant to drought and well drained soil is essential. A sunny spot is recommended. Like most Coccothrinax it is slow growing at first but speeds up considerably once a trunk is formed. With a maximum of about 6 m (20 ft.) tall, its size of course is ultimately so much more manageable than that of Bismarckia. In Riffle and Craft's Encyclopedia of Cultivated Palms, this species is described and pictured as Coccothrinax "azul". (RPS.com)