Clinosperma macrocarpa is endemic to New Caledonia, only located in the North 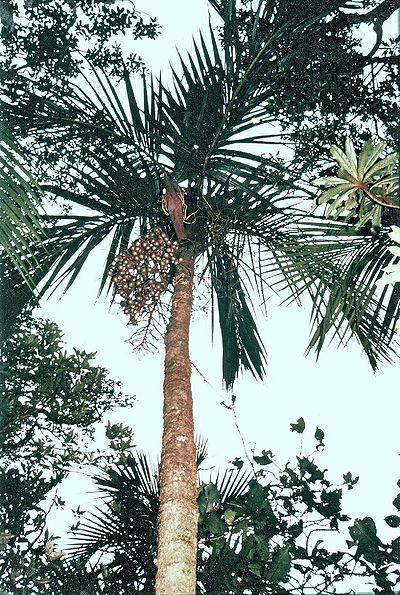 One of the rarest palms in the world, this species has attained almost mythical status among palm enthusiasts. It is practically unknown in cultivation and only a handful of trees remain in its native habitat in northern New Caledonia. Seeds have been said to be impossible to collect; however, we have done the impossible! Now your challenge is to get them to germinate. They have the reputation of being very difficult, to say the least, though few have tried. Perhaps fruits have not been completely mature at collection, as it is hard to detect when they are ready. There certainly is no other logical explanation. It is also possible that germination is simply very lengthy--and by this we mean years, not months. Lavoixia fruits have a thick peel, almost a shell, under which a fibrous, purple mesocarp can be found with a lovely, strong scent of ripe plums. The very hard-shelled, ridged and pitted endocarp resembles a peach kernel in size and shape. The actual seed is nearly smooth and the endosperm is very hard and nearly translucent. Based on DNA evidence, Lavoixia has recently been moved into the genus Clinosperma, a rather surprising decision in light of its very unique fruit morphology. (Rare Palm Seeds.com)