Clinosperma lanuginosa is found in the rainforests, of New Caledonia. This species is 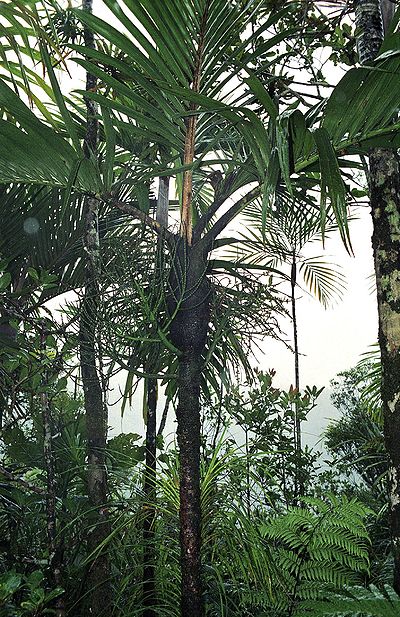 On Mt Panié at 700 m. altitude, in species-rich, high-rainfall forest - New Caledonia. The tall thin trunked palm at the rear on the right is Basselinia gracilis. Photo by Bryan.
present in the North East of the Grande Terre (the main island) only. An Undergrowth of the rainforest palm, found in deep sedimentary substrate (mica).

Small palm, 1.5 - 6 m. (20 ft.) high; 8 to 10 cm. in diam. it has a brown trunk, heavily scarred by old peduncle bearing the inflorescence, which arise significantly below the crownshaft. Spread: To approx. 10 Ft. Leaf detail: Pinnately compound, erect, with wide leaflets. Crown holds around five leaves, fairly erect, dark green, regularly pinnate, 1.30 - 1.50 m. long, with a petiole 60 cm. long, green, covered with a brown woolly tomentum sheath 40 - 50 cm. long, peninsula 'completely cut away from the petiole, entirely covered outside by a dark brown woolly tomentum. Phenology: Inflorescences 3 or 4, very horizontal, then curving upward between the leaves at anthesis, with a compressed peduncle, angular section with numerous erect, radiating rachillae. Fruits ovoid or ellipsoid, 2 - 2.5 x 0.9 to 1.2 cm., black at maturity, with a rather basal, stigmatic residue, a thick pericarp and smooth endocarp. Editing by edric.

A smallish, solitary palm to about 6 m (20 ft.) tall with a slender trunk to about 10 cm (4 in.) in diamteter. Atop a short crownshaft, which is thickly covered in brown wooly hairs, sits a sparse crown holding usually five compact, broad, keeled and slightly recurved leaves. It is native to northeastern New Caledonia, where it grows in low, shrubby, wet mountain forest between 700 and 1250 m (2300 and 4100 ft.). It is extremely rare in cultivation, mostly due to a lack of seeds. (RPS.com)