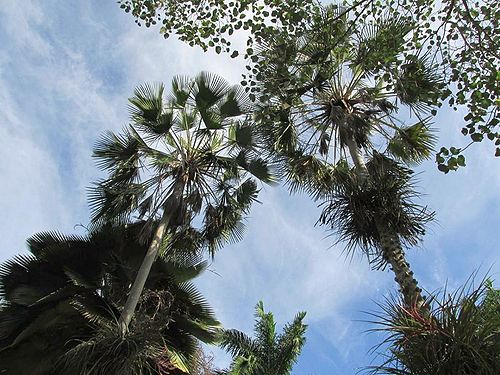 The carnauba wax palm, Copernicia prunifera, may be one of the most economically important as well as aesthetically pleasing palms around. It gets its name from the valuable heat resistant wax, which is harvested from the leaves. The carnauba wax palm grows to 30 ft. (9.1 m.) tall with a single gray trunk which is usually smooth on the top 1/3, while the lower 2/3 is marked with persistent leaf bases in a pleasing spiraling pattern. The crown is composed of about 24 fan shaped blue to green waxy leaves. Each leaf is deeply divided halfway into many segments and is about 3-4 ft. (0.9-1.2 m.) wide. The petioles are 2 -3 ft. (0.6-0.9 m.) long and are protectively covered with long curved spines. Editing by edric.

Copernicia prunifera is adaptable to many different conditions, originating in savannas, it is able to withstand droughts, as well as the occasional flooding. It is not picky about soil and is moderately salt tolerant. Light: Full sun. Moisture: Canauba wax palm is moderately tolerant of drought. Hardiness: USDA Zones 10B - 11. Propagation: Seeds germinate in about 1-4 months. Growth is slow.

Cultivated for commercial wax production in Brazil, the carnauba wax palm is also a highly prized, but little used, landscape specimen with few diseases or insect problems. With its ornamental blue/green fan shaped leaves and unique persistent lower leaf bases, this palm is ideal for the tropical home or commercial landscape. Care should be taken to allow plenty of room for this palm's future growth so it can achieve its best form. The carnauba wax palm plays a very important economic role in Brazil where the extraction and exportation of its heat resistant wax in a major industry. This wax is used in numerous products such as car waxes and floor polishes and even to protect the coatings on candies. The Carnauba Palm, is native to semi-arid areas of northeastern Brazil, where it is grown extensively on plantations. Its leaves are the source of a heat-resistant wax used in a wide variety of commercial applications from car wax and candy to cosmetics, dental floss, and paper plates. Lima et al. (2008) studied the role of Carnauba Palm in the ecology of the reduviid bug Rhodnius nasutus, one of several vectors capable of transmitting the pathogen Trypanosoma cruzi, which causes Chagas Disease in humans and currently infects millions of people in Mexico, Central America, and South America. In all locations studied, Carnauba Palms were found to be infested by R. nasutus, a substantial fraction of which were infected with T. cruzi, The authors discuss the risk of R. nasutus adapting to human habitations, as have other reduviid vectors of Chagas Disease. Whitney (2007), reported that the Fork-tailed Palm-Swift, of tropical South America, builds its nest of feathers and a small amount of plant material and glues it with saliva to the inside of dead, folded pendant leaves of the widespread palm Mauritia flexuosa--or, where this palm is absent in far northeastern Brazil, the leaves of Copernicia prunifera (interestingly, the large number of contour feathers the Palm-Swift uses in its nest are obtained by attacking birds of other species and grabbing off feathers with its bill). (Whitney 2007)

Elegant but tough palm from north eastern Brazil, where the wax is scraped from its fan shaped blue leaves for use commercially. In cultivation it is best grown in the dryer tropics or subtropics, though it is quite adaptable. As a young plant it also makes a good potted specimen for the conservatory or glasshouse where it will enjoy generally dry conditions and bright light. (RPS.com)