Calyptrocalyx polyphyllus was found by a European explorer, on the island of New Guinea, 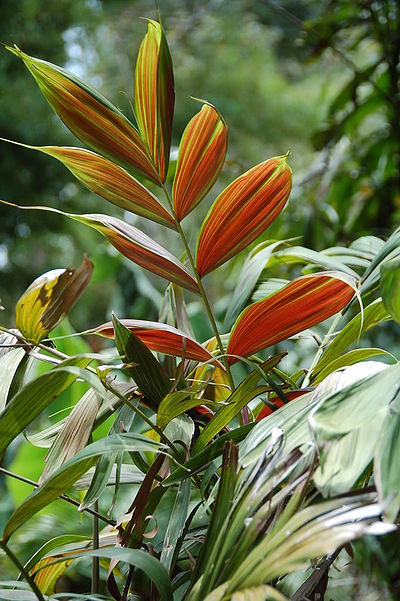 photo by H. Robert Wilson.
on a swiss expeditionary, Karl Lederman mapped the Sepik River (then known as Kaiser fluss) in Eastern New Guinea (now known as the nation, Papua New Guinea) and its many tributaries.

Whilst surveying one such river, which was later named April River (to commemorate the month of this particular expedition in 1912-13 ) he traversed a section of the Hunstein Mountain Range, and presumably came across this palm species and added it to his botanical collections, it also occurs in neighbouring ranges, especially Waskuk Hills and an isolated population (in respect to its distance from Hunstein Ranges) in the Torricelli Mountain Range, on the far interior side of West Sepik Province of Papua New Guinea. All of his plant specimens were sent back to Europe where Odoardo Beecari was instrumental in eventually describing this particular palm species as being "polyphyllus" which in Latin means many leaved. The altitudinal range varies from 120 meters to 700 meters, and probably over. It is suspected to be on higher slopes, but it definitely gives way to a sympatric species, Calyptrocalyx pauciflorus, which becomes more abundant as one goes higher. However in other localities, away from the Hunstein Mountain Range, it doesn't seem as particular to soil type, terrain or altitude. Editing by edric.