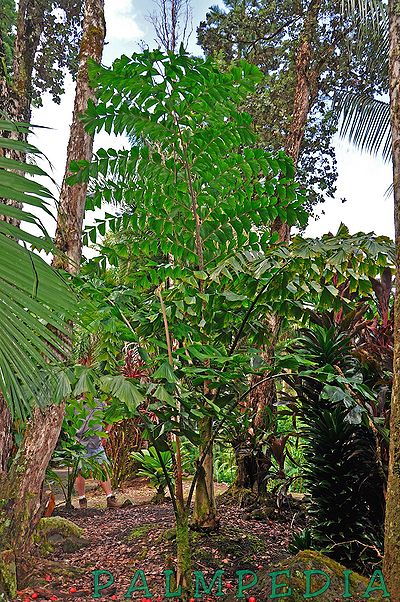 Floribunda Palms, Hawaii.
and Aneityum. Tanna is well populated, and here the palm is quite rare, although occasionally seen by the roadside, and in creek beds. It is a very long day walk to a small population of 3 palms, and at least a 2-day walk (i.e. 2 days there, 2 days back) to any larger populations. The natives grow the palm here, because of its attractiveness. Aneityum is far less populated, and consequently is a much wilder and more remote island, and here the palms are found in much greater numbers. (Dr. J.L. Dowe)

It is found from sea level up to about 400m, but mainly at sea level, and often very close to the ocean, where it is subject to salt-spray and high winds. The soils tend to be rather poor, old volcanic soils. The climate is cool tropical, with 500 - 600 mm of rain per year, mostly falling in summer, the winters being rather dry.

Trunk type: Solitary, Hight: To 8 meters, this is strictly an understory palm. Leaf detail: Alternately opposed, bipinnate, light green. This species flower, and fruit, closely resemble that of Arenga, and is thought to be a missing link between the two. The Caryota palm dies, after bearing fruit.

It is a 7-8 metre high, single stemmed understorey palm (it has never been observed breaking the canopy), with a very neat leaflet arrangement (in contrast to most other Caryota ). In many respects it is a missing link between Arenga and Caryota, because the inflorescence is branching as in Arenga , while the fruit is closer in structure to Arenga than to Caryota as well. It is a very isolated Caryota , with its nearest relative being found on the Solomon Islands. This distinct gap between closely relatived plants is rather typical of South Pacific island palms, because so many have developed in considerable isolation. (Dr. J.L. Dowe) Editing by edric.

This a monocarpic species.

The petiole are what give the palm its common name, Snake-skin, since they are covered with a amazing pattern combination of white, black, or gray stripes. The stripes are all random, changing with each new leaf that emerges. The pattern on this palm closely resembles a South Pacific python know locally as “In-reg-jay”.