C. macrocarpa is endemic to the mid-elevations of the New Caledonian rain forest 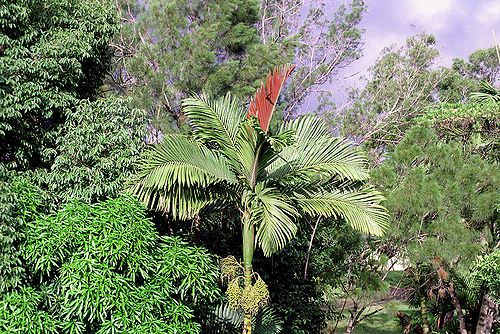 A feather solitary palm to about 20-25 ft, with a spectacular, bright red new leaf, which stays red for up to 10 days. The leaflets are also very wide, thick, and shiny, so even without a new leaf it is very distinctive, with very fat and thick pinnate leaves, 10-12 feet long. Easy to grow. This is a must have in the garden.

Chambeyronia macrocarpa and comes from New Caledonia. The luscious island of New Caledonia is east of Australia and north of New Zealand. On this island you will find extraordinary primitive plants including the Flamethrower which dates back to the Mesozoic Era, when dinosaurs roamed the planet. The Flame Thrower is considered cold hardy. They can resist temperatures down to 25 degrees F. The Flame Thrower Palm is a large, robust palm that has pinnate palm with broad leaflets. Their leaves are deep shade of green re-curving and drastically arching leaves. It has a swollen crownshaft which makes it very appealing sitting above the beautifully ringed trunk. The leaves are dark green and leathery in touch and appearance when mature. The Flame Thrower Palm is very easy to care after. These exotic and rare cold hardy palms thrive in a well-drained, moist climate with full sun to light shade. It is also know as the blushing Palm, Watermelon Palm, Red Feather Palm, and Red Leaf Palm. It also has one new emerged leaf that will be red to maroon in color but will fade after 2 weeks. This rare palm tree is a slow growing palm tree with a maximum average height of about 15-20 ft. This palm tree will have any person in awe with its beauty. The Flame Thrower Palm is a wonderful specimen to have whether it is in your home, office, or landscape.

There is supposedly another exceptionally robust variety with a crownshaft covered in white tomentum.

This palm has become very popular and successful in warm temperate locations, belying its existence as a warm rain forest palm. As a fast grower in the tropics, it still maintains a good growth rate in warmer temperate locations. Intolerant of hot dry conditions, it is well suited to conditons such as those in coastal Southern California if given the prerequisite rich well draining soil.

In Southern California, these palms do best with some shade; the further inland from the sea (or ocean influence) they more shade they like. However, they will also take full sun in areas along the coast, or with heavy coastal influence (e.g., Whittier, Camarillo, Beverly Hills, Santa Ana, La Mesa) if they're watered frequently. In full sun, they should be watered every two or three days at half or one-third the water to be given in a week.

These palms are not bothered much by pests, though scale and whitefly can be a problem. Most of the time, ladybugs and other weapons in Mother Nature's arsenal will keep bad bugs at bay.

As the national tree of New Caledonia, it becomes obvious why, when one is on approach to that country's airport. This gorgeous tall emergent species can be seen poking its head above the forest, and becomes especially visible while sporting its trademark new leaf. After observing many cultivated Chambeyronia macrocarpa in private and public gardens, one begins to notice how variable this species is. Leaflet width varies greatly, as does the sheen, from glossy to matte finish, as well as different colorations on the crownshaft and petioles.

Flowers/Fruits: It produces stalks of small purple flowers that comes from below the crownshaft. Inflorescence is branched. Flowers are followed by small round berrylike green fruits that turn red when ripe.

Cold Tolerance: Flame Thrower Palm can resist temperatures down to 20F when mature enough. It is great for growing in USDA Zones 9a (20 to 25 F) to 11 (above 40 F).

Water Req:Moderate. It does best in moist well drained soil.