Copernicia fallaensis is endemic species of the central part of Cuba. Though Cuba's most 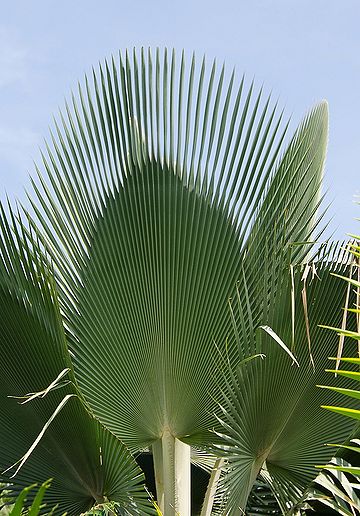 Thailand. Photo by Daryl O'Connor.
magnificent palm apparently was once widespread in the provinces of Camagüey, Ciego de Ávila and Villa Clara in the center of the island, where it formed big populations in low-laying regions as part of a semideciduous forest that covered vast areas on rich, clayey soils.

Copernicia fallaensis produces a massive, smooth, light gray trunk that is thickest near the middle and can reach up to 20 m (67 ft.) tall. The huge, rounded crown consists of many enormous, oval leafblades that are very evenly divided into about 120 very stiff segments. Seen against the bright sky, these form a mesmerizing pattern. The color of the leafblade is a waxy blue green and the broad, flat leaf stalks can be almost white. In Cuba, the fruits are eaten by fruit bats. While there has been some discussion in recent years on this palm being merely a robust form of Copernicia baileyana, anyone who has ever seen the two "in the flesh" agrees that that would not be justified. While Copernicia baileyana is a fantastic palm in its own right, C. fallaensis tops it with ease. It is doubtlessly the best of the Copernicia and surely one of the most stately of all palms. Mature plants are a truly awe-inspiring sight that is not easily forgotten. Editing by edric.

In cultivation, the Giant Yarey Palm is exceedingly rare. It is very easy to germinate and even though it is rather slow growing, especially as a seedling, it adapts well to a wide range of conditions in the tropics and warm subtropics.

Today there is only a tiny community of less than 100 mature trees remaining in secondary savanna near the town of Falla (Ciego de Ávila province), after which the palm is named. It is considered critically endangered of extinction but unfortunately measures to better preserve its last remaining population have been rather halfhearted, most likely due to a lack of funding. While felling is no longer a problem, overexploitation of the leaves for thatch and weaving is the main threat at the moment.