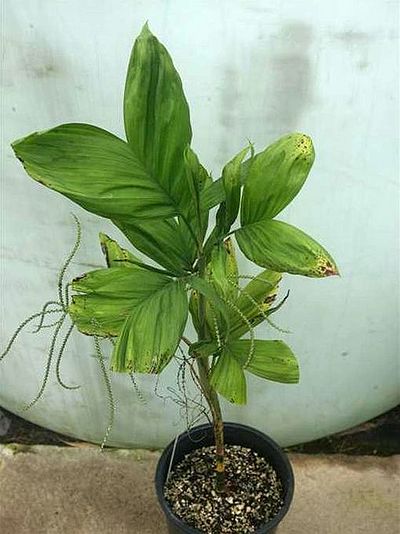 A solitary palm from the understory, of lower elevation rainforests in Costa Rica, Nicaragua and Panamá, which holds a spread-out crown of approximatel 15 spread out leaves with only a few leaflets, the terminal pair of which is much larger than the lower ones. It is generally erect from 1-2 m tall, with slender stems from 7-8 mm in diameter that are green and prominently ringed. Its bright orange infructescences, with shiny black fruits when ripe, are particularly attractive. Editing by edric.

It is an easily grown plant for the warm temperate and tropical garden, and also does well indoors.

Indigenous peoples in the Talamanca region ofLimon Province in Costa Rica refer to C. dammeriana as sirik and maintain that it has magical powers to heal various ailments. Medicine men place a leaf of the species near to and pointed at the ill person. A transfer of " healing power" occurs when the medicine man blows onto the leaf and toward the afflicted individual. (Hodel)