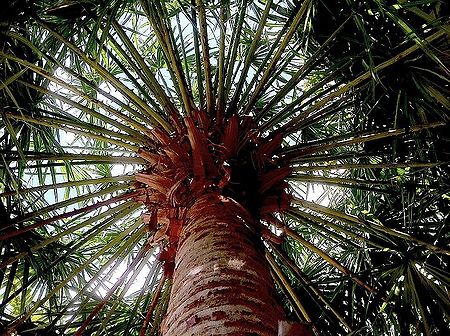 Copernicia alba grows naturally, in a wide open area of South America, covering territories in Northern of Beni in Bolivia, central west in this country, West Matogrosso in Brazil, northeastern Paraguay, northern and northeastern Argentina, where the provinces of Santa Fe and Corrientes, is the southern limit of the species habitat at 30° South approximately. The region shown covers about 400,000 km2, where it is estimated that C. alba far outweigh the 500 million specimens. (see map below). In Argentina, the growth area of Copernicia alba is located in the floodplains of big rivers (Paraná, Paraguay and Bermejo), a large plateau that ranges from 50 to 100 m above sea level in areas mostly grassland and savannah seasonally flooded with runoff from W-NW to E-SE, along the edges of forests occupied by high ridges, forming clusters of high concentration of individuals at different stages of development. It then describes the study area the next job is comprised of the North and Northeast region of Argentina that within the Gran Chaco geographic region, corresponds to the so-called “Chaco Oriental” or Humid Chaco, which occupies roughly the eastern half of the provinces of Chaco and Formosa, starting from the northern half of the province of Santa Fe.

Copernicia alba has solitary trunk, gray, slender, 7-9 m. high and 0.25 m. in diameter and can reach exceptionally to 13 m. high and 0.40 m. in diameter at the base. Is covered with leaf debris from the base to the first third of its height and continued smooth and naked to the crown of leaves. The crown is circular at the bottom keeping the dead leaves and debris infructescenses. Can have more than 50 leaves. The leaves are clearly palmates, glaucous green, lamina 75-80 cm in diameter with 30-35 segments induplicates, slightly forked, each 35 cm. long and 4-5 cm. wide. The sinus can penetrate up to 75-80% of limbo. Hastula small, slightly upturned crescent adaxially. Long petioles 1.2 to 1.3 m long including the leaf sheath and 2.5 cm wide at its middle, with margins armed with around 18 recurved teeth on each side. The inflorescences are multiple, interfoliar and erect, standing out from the leaf crown. Long spadices with hermaphrodite flowers, pale cream-colored, solitary or grouped. Sepals 3, petals 3, stamens 6, monadelphous, coupled in turn with the corolla. Superior ovary composed of 3 free carpels at the base, once-ovulated. The fruits are dark green when mature, sub-globose and 1.2 - 1.5 cm. in diameter, one oval seed with abundant white and homogeneous endosperm. The infructescenses hanging by the weight of the fruit, protruding from the crown. It is common to find a number (variable depending on season) of fruits brown or black very weakly attached to rachillas making it unfeasible as they tend to fall from the palm and are parasitized by larvae that attack the seed endosperm. (Smithsonian Tropical Institute) Editing by edric.

Sunny, moist, warm, Not well known in cultivation, this palm is the most cold resistent of all Copernicias. This species is the cold hardiest of the genus Copernicia, coming to withstand low temperatures from -5 to -7 ° C without any damage. Zones 9a-11.

Uses: The trunk is very hard and is used for telephone poles, are also divided longitudinally to divide farmers fields and to build fences, walls and floors, the old inflorescences are used as brooms. The roots are boiled, and used for medicinal and veterinary, both for musculo-skeletal, and, blood and cardiovascular system.