Brahea decumbens is found in Mexico Northeast. Native to Mexico, and found in the exposed rocky limestone hills, of the Sierra Madre Mountains. 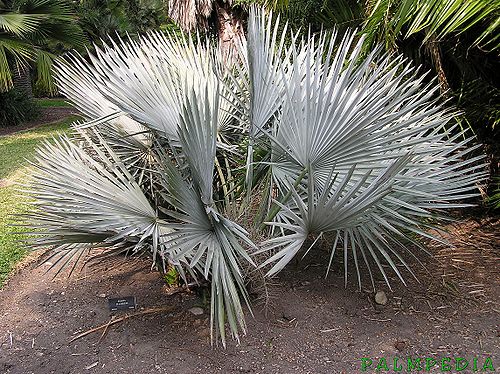 Also known as the Mexican Dwarf Blue Palm, or the Sierra Madre Palm, it's one of the most sought after Braheas due to the rarity and beauty. This tree derives its name from the decumbent habit of the trunk which crawls along the ground. Brahea decumbens is rare and vulnerable in the wild because the seeds are usually eaten by insects or goats. The Brahea decumbens is a plam which has a natural growth habit of lying or growing on the ground with erect rising tips forming a rounded crown. It is native to Mexico and found in the exposed rocky limestone hills of the Sierra Madre Mountains. The most extraordinary characteristic of mature specimens of this palm is the phenomenal steel blue fans which are perhaps the bluest leaves of any palm. Each leaf can grow to a two and three foot wide half circle of stiff bluish segments and the petioles are armed with spines. The leaves glaucous blue color is due to a covering of a waxy bloom on both top and bottom, which is easily removed by touch. Offsets and seedlings have green leaves. This is a clustering species. Brahea decumbens is one of the hardiest of the Braheas. Brahea decumbens is one of the toughest palms around with high drought and frost tolerance. This is a slow growing palm which will grow best in full sun and will tolerate some shade. Consider a placement in the garden with southern exposure when used as an under-story palm. This palm is not particular about soil type and will do well even in poor soils, as long as it has excellent drainage. The inflorescence grows erect, above the foliage. Braheas have bisexual flowers, therefore only one specimen is necessary for the production of viable seeds. If you have an opportunity to add this to your collection, this handsome Blue dwarf will certainly add drama to your landscape. Editing by edric.

While fairly well known to palm enthusiasts all around the world, for some reason this palm has always managed to escape cultivation. What this small palm lacks in stature, it makes up for in color, and the striking, steel blue leaves really are an extraordinary feature. It is one of the toughest palms around and perfectly adapted to poor soils, drought and severe freezes. It will grow slowly but steadily in a place in full sun in all temperate and subtropical climates. B. decumbens has always been on top of the list of the most desirable temperate palms ever, and specimens such as the famous plant at Huntington Gardens in California have spirited entusiasts' minds. Yes, seeds have been around, many false ones, eventually turning out to be B. berlandieri or B. dulcis, but the true B. decumbens has been ever so rare. (from rarepalmseeds.com)