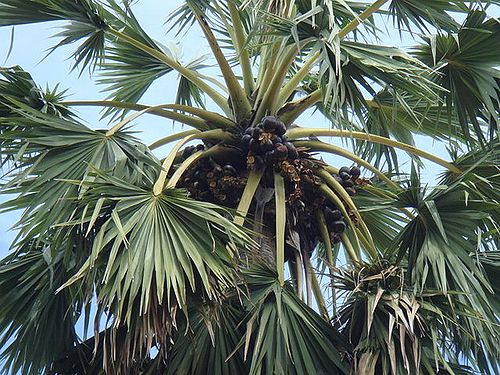 Female tree, showing foliage crown with fruit.
India, Jawa, Laos, Lesser Sunda Is., Malaya, Myanmar, Socotra, Sri Lanka, Sulawesi, Thailand, and Vietnam. South and Southeast Asia. Determining the ‘natural’ distribution of Borassus flabellifer is essentially impossible as it is a widely planted crop plant. It is largely restricted to areas with seasonal rainfall and ranges from western India through Indochina to the Lesser Sunda Islands of Indonesia.

Populations in China, Malaysia and Pakistan may be introduced (Whitmore 1973; Malik 1984; Pei 1991). Borassus flabellifer was noted to occur in Queensland, Australia by Bailey (1902). A seedling was collected from a small population of mature palms and cultivated in the garden of Frank L. Jardine in Somerset on the Cape York Peninsula of northern Queensland. Jones (1984) noted that the palm was still present in the garden of Jardine’s abandoned house, but the original population was never located and the natural occurrence of Borassus in Australia is doubtful. The Borassus palms on the island of Soqotra have tentatively been assigned to B. flabellifer. Soqotra is geographically closer to Africa and the palms were identified as the African B. aethiopum by Miller & Morris (2004). The available herbarium material does not allow for a conclusive identification (the diagnostic fruits and petiole spines are missing), but a photograph presented by Miller & Morris (2004) shows a mature plant without a ventricose stem. This suggests that the palms, which were introduced to the island, are B. flabellifer. It is difficult to determine the original habitat of B. flabellifer as its distribution is so heavily influenced by man. It occurs between sea level and 800 metres, though is more abundant at low altitude and is particularly common in coastal areas with sandy or alluvial soils and in areas with permanent soil moisture such as flood plains and river valleys. It is commonly grown along the margins of rice paddies forming one of the most distinctive landscapes of Southeast Asia. (R.P. Bayton. 2007)/Palmweb.

Native to South and Southeast Asia, in the Indomalaya ecozone. It's a palm tree of the Sugar palm group, is found from Indonesia to Pakistan.

Borassus flabellifer has a growth pattern, very large size, and clean habits that make it an attractive ornamental tree, cultivated for planting in gardens and parks as landscape palm species. Hot, sunny, well drained position. Drought tolerant, cold sensitive. The seed is best germinated in its final position, since it very much resents being moved once established.