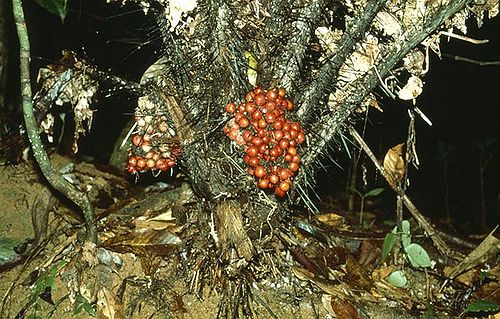 Bactris rhaphidacantha is diagnosed by its short stem; regularly arranged, spreading in the same plane, linear pinnae; and filamentous rachillae. In southern French Guiana some specimens (e.g., de Granville 7109) have pinnae clustered proximally on the rachis, and thus approach B. acanthocarpa var. exscapa (which occurs in adjacent areas). Because inflorescences, flowers, and fruits are similar, B. rhaphidacantha could possibly be included as a variety of B. acanthocarpa. (Henderson, A.J. 2000)/Palmweb.

Bactris rhaphidacantha is practically unknown in cultivation, but would make an attractive addition to the tropical garden. Germination is rather lengthy, and will take at least 6 months.