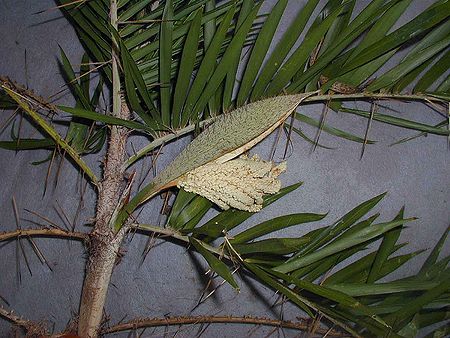 Baetris guineensis is diagnosed by its linear, pale gray-green pinnae that are asymmetrically and briefly bifid at the apex and readily fall from dried specimens. Synonymy was established by de Nevers et al. (1996). Glassman (1972) and Henderson et al. (1995) included Aiphanes minima (Gaertner) Burret in synonymy here but it does not belong. (Henderson, A.J. 2000)/Palmweb.

Uses: Ripe fruits are used to make a rich drink Cosinan and trunks are used in residential construcion. In Venezuela, they produce an alcoholic beverage (rum Piritu) prepared from the maceration of the fruit then the wine is used to make rum. The maceration is 2 or more months. It is a very popular drink in Venezuela. In Colombia trunks after being slightly burnt are used to manufacture an instrument called guacharaca which is typical of vallenato sets. It is used for processing vio-combustibles, is used the soil conservation, wood is used as in the constructions of walls and roofs. The fruit and the bud tender, fresh, edible. (From the Spanish), edric.