From Palmpedia - Palm Grower's Guide
(Redirected from B. yatay)
Jump to: navigation, search 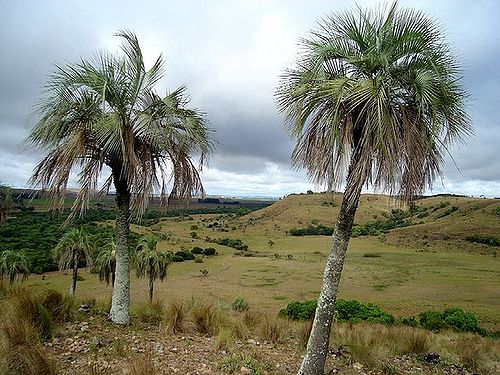 Brazil. Photo by Dr. Kelen Soares.
Native to northeastern Argentina in the provinces of Misiones, Santa Fe, Corrientes, and Entre Rios, forming great forests in sandy areas; and to Uruguay in the departments of Paysandli and Rio Negro, in sandy soils. (S.F. Glassman. 1979)/Palmweb.

Butia yatay is easily distinguished from other arborescent species of Butia by the relatively large pistillate flowers (10-16 mm vs. 3-8 mm long). Its geographic range apparently does not overlap with that of B. capitata, B. eriospatha, or B. purpurascens. However, B. yatay is sympatric with B. paraguayensis in at least part of its range (in Corrientes and probably Misiones) and may be confused with the latter species during its immature, acaulescent stage of growth. Crovetto and Piccinini (1951) did an ecological study of 13 different stands (palmares) of Butia yatay in northern Argentina (provinces of Entre Rios, Corrientes, and Santa Fe). At first, they believed that these palmares represented a stage in the psammosere succession because the plants grew in sandy soil. After intensive studies, however, they concluded that the Butia yatay community was not involved in the formation of the regular climax of the region, but was independent of the typical succession of that area. Hence, these palmares were interpreted as being a relict climax, or an ancient vegetation type left over from a previous geological period when climate conditions were perhaps different than they are today. (S.F. Glassman. 1979)/Palmweb. Editing by edric.

Min. temps. 10 to 14 degrees F. B. yatay tolerates low temperatures well and can take frost to -10 º C. It prefers organic-sandy soils but may grow on limestone and clay, provided they are deep and well drained. (Jose A. Grassia)

Seeds of this variety, often take up to ten months to germinate.