From Palmpedia - Palm Grower's Guide
(Redirected from B. sarukhanii)
Jump to: navigation, search 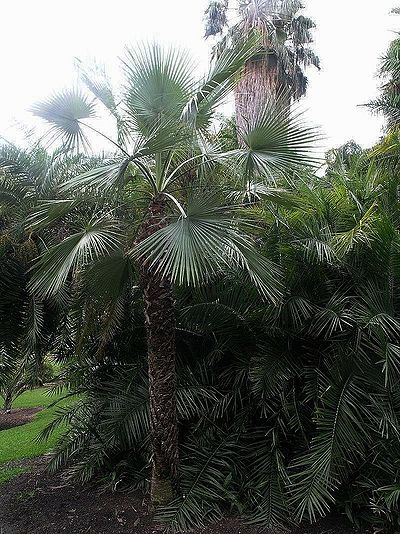 This new species is known only from the mountain regions of Ameca, Jalisco and near the border between the states of Nayarit and Jalisco, on hillsides with abundant basaltic rocks. It is an important element of the physiognomy of the Dry Tropical Forest and Pine-Oak Forest of that region where it grows at an elevation between 1100 and 1650 m. The most similar speciesto the new one are Brahea aculeata, B. dulcis and B. pimo; however, B. sarukhanii differs from B. aculeata in its smaller oblong fruits and the scarce, small teeth of petioles. From B. dulcis it differs in that the fruits are nearly double the size and the rachillae are shorter. In contrast with B. pimo, it has thicker rachillae, larger fruit and more sparsely armed petioles. (H.J. Quero. 2000)/Palmweb.

Palm to 5 m tall. Trunk solitary 10-15 cm in diam. with persistent sheaths and petiole bases through almost all its length. Crown with about 12-18 leaves per crown. Leaf to 1.60 m long; petioles glabrous, 45-90 cm long, 15-22 mm wide at the base, 10-12 mm wide at the apex, armed with small teeth about 1.2 mm long at least toward the base, usually flat above convex below, abaxially projected in a small costa 5-9 cm long, hastula triangular with short membranaceous point; blade scarcely costapalmate, circular in general outline, 80-115 cm in diam., with 52-67 segments and a palman of 30-50% of the radius of the blade, at least in the middle; central segments 60-80 cm long, 1.8-4.0 cm wide, the free portion deeply bifurcate, each portion with entire apex, and prominent, numerous closely spaced secondary nerves with connecting cross veinlets visible underneath. Inflorescence arching, equal to or slightly exceeding the leaves, 120-150 cm long; prophyll bicarinate with triangular apex, opening apically, about 20 cm long, 35-40 mm wide; peduncular bracts 2; rcchis bracts with triangular apices; peduncle less than 1/3 the length of the inflorescence; primary branches 7 (-9), rachillae 8.0-14 cm long, 3.0-3.5 mm in diam., densely woolly-tomentose. Flowers solitary, creamy-white, 3.5 mm long; floral bracts and the base of calyx sunken in the tomentum; calyx 1.2-1.5 mm high, sepals canescent in the upper inner surface, free and imbricate; corolla at least twice the length of the calyx, petals triangular ascendent, imbricate and connate at base, valvate above, 2.5-3.0 mm long, strongly costate when dry, canescent at the outer base; stamens shorter than the petals, anthers 1.5 mm long; pistil about 2.0 mm long with connate styles, ovary pyramidal, lightly stipitate with free carpels, canescent at the base, shorter than the style, stigma punctiform. Fruit ellipsoid to nearly oblong, sometimes slightly falcoid, 18-20 x 12-16 mm with blunt subapical ventral stigmatic remnant and a median ventral groove, creamy and canescent when young, black and glabrous at maturity; epicarp smooth, mesocarp fleshy and fibrous to 2.5 mm thick, endocarp cartaceous. Seed oblong, smooth, 14-16 x 12-13 mm, endosperm homogeneous intruded by a horny ventral postament; embryo subbasal. (H.J. Quero. 2000)/Palmweb. Editing by edric.

Requirements: Full sun when mature, water sparingly, fast draining soil. Drought tolerant, frost tolerant. New to cultivation. While being a common component of the native vegetation within its range, it has remained exceedingly rare in cultivation. It can be expected to thrive under most temperate conditions and be hardy to considerable freezes. Cold Hardiness Zone: 8a

"newly described species (2005) from Mexico where it grows at moderate elevations (over 3000'). Was for a long time thought to be a variety of Brahea dulcis, and could still be according to some. Has elipsoid seeds. Otherwise looks like a Brahea dulcis to me." (Geoff Stein)

Long believed to be nothing else than the common B. dulcis, this palm has only recently been described from its habitat occupying a small area on the border between the Mexican states of Nayarit and Jalisco, where it grows in dry tropical and pine-oak forest, high up in the mountains between 1100 and 1650 m (3600 and 5400 ft.). While similar to B. aculeata and B. pimo, with a moderate stature and a smallish crown of green fan leaves with lax tips, it can readily be separated from the two. Its fruits are much smaller than those of B. aculeata while being bigger than those of B. pimo and much larger than B. dulcis. With B. dulcis it shares the thick, densely furry branchlets of the inflorescence. (RPS.com)