From Palmpedia - Palm Grower's Guide
(Redirected from B. salvadorensis)
Jump to: navigation, search

Brahea salvadorensis is found in El Salvador, and Nicaragua. In open forest. 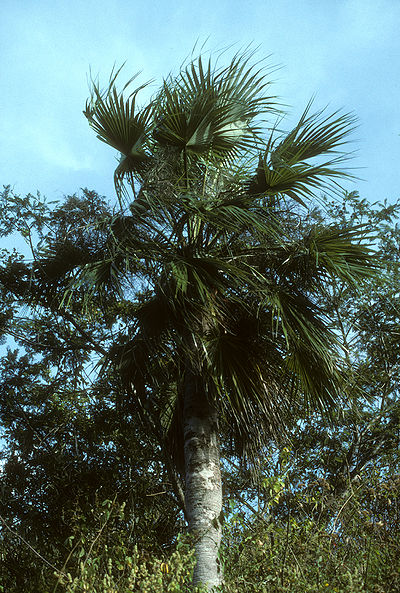 Near Tegucigalpa, Honduras. Jan. 1994. Photo by Dr. Scott Zona
It is a rare species found in dry rocky slopes, sometimes in pine - oak, north central area at an altitude of 800-1600 meters in El Salvador and Nicaragua. Flowering occurs in August. (From the spanish).

"This is one of the larger-leaved Braheas, and one that was only recently (2006?) officially included in the Kew checklist of palms ... until then, many researchers had lumped it into Brahea dulcis. It also has uniquely fuzzy leaves on the underside (well, nearly uniquely- Brahea pimo, a MUCH shorter palm, has fuzzy leaves, too). Only specimen I have ever seen is an old one at the Huntington Gardens in Pasadena California." (Geoff Stein)