From Palmpedia - Palm Grower's Guide
(Redirected from B. clara)
Jump to: navigation, search 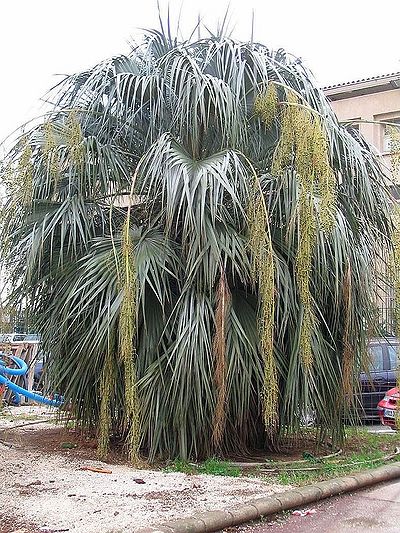 Trunk type: Solitary. Hight: To twenty feet. Spread: To fifteen feet. Leaf detail: Costapalmate, with armed petiole, leaf tips droop on mature fronds, colors range from olive green to bluish green. Although this palm, has warranted it's own classification, it is believed to be a hybrid between a armata, and a brandegeei. Growth rate: faster than other, closely related Brahea. Editing by edric.

They are likely to be more tolerant of warm and humid conditions but less hardy to extreme cold. They should also be a better choice for cooler sections of the California coast than Brahea armata.

Brahea clara has at times been accorded species status, it is likely a natural hybrid of Brahea armata with B. brandegeei. It is known from around the San Carlos Bay in Sonora. The influence of B. brandegeei imparts its softer leaves with a distinctly droopy character, much like Livistona chinensis. Although this is the one identifiable trait that distinguishes it from other armatas, the color can range from a somewhat unpleasant olive green to an exquisite icicle blue. Such specimens are utterly breathtaking in their beauty. As Brahea brandegeei is the fastest growing Brahea, claras have been observed to be much faster growing than armatas.

Botanically perhaps synonymous with B. armata but horticulturally said to be distinct, this Brahea from Sonora, Mexico is reportedly more vigorous, faster growing and better adapted to warm humid climates. (RPS.com)