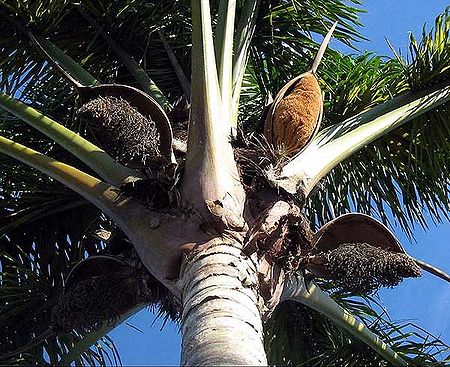 Brazil. Photo by Evandro Ferreira
Widespread in lowland South America E of the Andes, in Colombia, Ecuador, Peru, Bolivia, and Brazil. Distribution in Ecuador. In Ecuador it is common on well drained, non-inundated soils in the eastern lowlands. Adult plants are usually scarse, but juveniles may be quite abundant in the forest understorey.

Grown commercially for its oil, and is currently being investigated for its suitability for biodiesel production. This plant has a yellow edible fruit which is oblong ovoid and cream.

Uses: Food, thatch, fuel, Cosmetics, Utensils and Tools. Medicinal and Veterinary; respiratory system. Top quality blowgun darts are made from the petioles which are split and cut into short lengths, and the leaf rachis. Fruits are edible and, mixed in cold water and drunk, they are used to treat colds. Indigenous may use the spathe for carrying fruits and tapioca meal or even for heating water for cooking meal. The Kuripano Indians of the Guainía River believe that the curupira, the evil spirit of the forest, oftentimes with feet that point backwards.

The species was first described by French botanist Jean Baptiste Christophore Fusée Aublet in 1775 in his Histoire des plantes de la Guiane Francoise as Palma maripa. German botanist Carl Friedrich Philipp von Martius transferred it to the genus Attalea in 1844. Hermann Wendland moved it to the genus Scheelea in 1878, while Carl Georg Oscar Drude moved it to Maximum ride. Otto Kuntze moved it to the genus Englerophoenix in 1891. Orator F. Cook placed it in its own genus in 1940, which he named Ethnora in recognition of Aublet's as a pioneer of the anti-slavery movement. Recent work has favoured maintaining all Attaleinae in a single genus, Attalea.