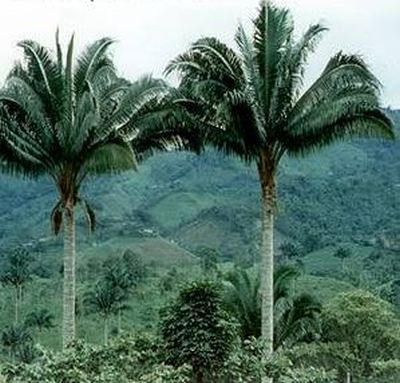 Canopy palm. Stem solitary, to 35 m tall and 35-60 cm in diameter, smooth, with neatly abscising leaves. Leaves arching, with twisted leaf axis so that the distal part of the blade stands in a vertical plane; pinnae to 200 on each side, regularly inserted in one plane, the central ones 150-200 cm long and 6-9 cm wide, with cross veins inconspicuous. Inflorescence erect, 150-300 cm long; branches 600-800, to 40 cm long. Male flowers pale yellow, with triangular, imbricate petals, 10-12 mm long, and 8-11 stamens of the same length. Female flowers 10-15 mm long. Fruits light brown to orange at maturity, 4-6 cm long, with 1-3 seeds.(Borchsenius, F. 1998)/Palmweb. Editing by edric.

Attalea colenda is a monoecious palm. In dry regions, it is a valuable source of oil in self-sufficiency farming or in combination with cattle in pastures. The palm was studied over a gradient of dry to humid environments during two fruiting seasons. Palm growth, production of leaves, inflorescences, and infructescences, number of fruits per infructescence, and seed weight of five populations were evaluated. The individual of average size is 15 m tall, which corresponds to approximately 30–40 years of age. No difference in fruit production was recorded between wet and dry regions of coastal Ecuador. The average production of one hectare of pasture, with 50 palms, was 0.9 t of oil per year. One population that was part of an agroforestry system produced 50% more fruits than the average of all populations in pasture. Native to the coastal plain of western Ecuador, produces from one to four infructescences per tree every year, each with an average of 5065 fruits. The oil content of the seeds is 56.9% dry weight. Kernel oil production per infructescence is 7–16 kg. A hectare with 50 trees can produce between 0.35 and 3.2 tons of oil per year. The kernel oil is chemically similar to coconut oil and and kernel oil from the African oil palm. The increasing demand for lauric oil on the world market makes A. colenda a potential oil source.

Uses; Used in Manta oil, made from the seeds, it is extracted commercially, and used for cooking oil.