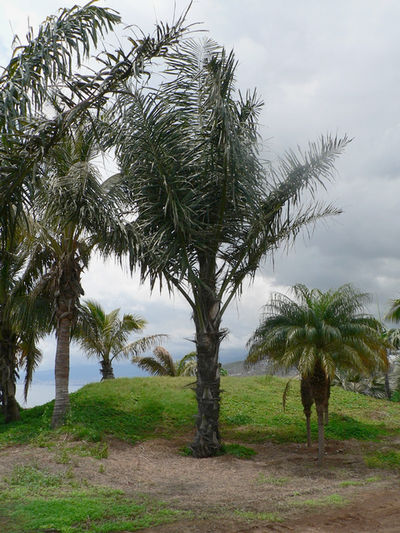 Malaya, Myanmar, and Thailand. In Laos mak tao is mainly found along streams in mountainous, limestone rocky areas, or in humid and cool evergreen forests everywhere in the country. Ranges from Burma and south China to Vietnam, Thailand and Malaysia. Rainforests.

Arenga westerhoutii is a single-stemmed, evergreen palm growing up to 12 metres tall. The unbranched stem can be 40cm in diameter, crowned by a rosette of around 6 - 12 leaves. The plant is harvested from the wild for local use as a food and source of materials. All species in this genus have either recognized or potential ornamental value.

A. westerhoutii is smaller than other Arenga species. In Laos three types are known: tao kai, with stems of up to 4 m with small reddish fruits, which cause itching when eaten; tao kouay, the most common, with three to seven inflorescences per tree and a large round (undulating, with a dent at the top) white fruit with small seeds; and tao ngou similar to tao kouay, with one to three inflorescences per tree. This last produces a lot of fruit, which is long, square, and has a flat surface, giving the highest yield. Growth Habit: Solitary, Trunk Type: No Crownshaft, Brown Fibrous, Leaf Type: Pinnate, Leaf Size: Up to 8 m (26 ft) Leaf Color: Dark Green, Silver Underside, Petiole: Unarmed. Editing by edric.

Light: Full Sun, Partial Shade, Soil: Consistently Moist, Fast Draining, Min. Temp: 2°C (36°F) Tolerances: High Humidity, Germination: 1-3 Months,30°C (86°F). The tree does not flower until it is mature. A flowering shoot is produced from each node on the stem, commencing with the node at the top of the plant and working down to the base. Vegetative growth ceases when the first flowering shoot is produced, and the stem dies once flowers have been produced from the basal node. Solitary-stemmed species, such as this one, die after flowering.

The mak tao seed is popularly used in desserts and ice-cream in Laos and Thailand. Young shoots or leaf buds (sometimes called ‘mak tao cabbage’) are an edible local delicacy. Leaves are used as roofing and packing material while a sweet drink can be tapped from the top of the male flowers and made into palm wine. In Laos the seeds are harvested by climbing trees and cutting down fruit clusters. The hair on these clusters should be avoided as it can cause itchiness. The top of the male inflorescence is cut and closed with clay for two days, after which it is removed by making a second cutting and the sweet drink is collected. If kept in bamboo containers for another two days, a wine is formed. Within 50 m of streams, densities of 120 mature trees/ha are common. Yields can be 200 kg-300 kg fruit/tree, and 10 kg of fruit provides 3 kg-3.5 kg of seed. Trees produce seed after 13 years, after which they fruit again every two years. After three or four harvests a tree dies. Natural, and village ownership; semi-open access.Seed is extracted by splitting the fruit, which is done in the forest to ease transport. Extraction should be performed in the shade to preserve quality. The seeds are then boiled and can be kept in bags for 18-20 days, provided moisture and sunlight are avoided. The Keoviengkham company in Ban Kheun cans the seeds. Shoots are cooked in a variety of local soups. In Thailand, seeds are boiled in syrup and dried before being packed into 100 gram bags. Slightly immature fruit produces the best seeds. When seeds turn red and start to ferment, their value drops. Most mak tao fruit is exported to Thailand to make sweets. In 2000, 600 tonnes went that way at US$0.33-$0.54 per kg. The biggest buyer in Thailand is Lampang Foods, which buys 5,000 tonnes per year from farmers at about $0.3 per kg. The price in Xieng Khong, Thailand, opposite Bokeo, is $0.4 per kg. After processing in Thailand the value jumps to $2 (possibly a retail price). Export of canned fruit to Thailand is limited by high import tax, which is not applied to raw fruit. Locally, fruit is sold for $0.2 per kg (2005). Palm shoots are found on local markets at $0.3-$2 per kg (2004). One hectare could yield about 12,000 kg21,000 kg of seed, equivalent at current prices to $3,300$5,800 per ha. The Thai tax barrier is the main obstacle to developing a processing industry in Laos. All fruit harvested in Laos comes from wild trees. In the wild, seeds are spread by wildlife eating the fruit, especially civet cats. For domestication, mature fruit is cleaned before planting and germination lasts three weeks, with a 75% survival rate. Spacing of 6 m x 9 m under the shade of other plants is recommended in order to maintain soil moisture.

Edible Uses: The taller Arenga palms store large quantities of starch in their stem that are later converted into sugar to be translocated to the inflorescences. The sugar can be drawn off in the juice by tapping the peduncle and rachis of the male inflorescence. By far the most important sugar producer in the genus is Arenga pinnata, but other species are used similarly. The starch of the stem can also be harvested. The apical bud (known as a 'palm heart') of all the species in this genus is edible and is used as a vegetable. However, consuming large quantities of the buds is not advised since, in some species (especially Arenga tremula) they can provoke toxic effects. Harvesting the apical bud also leads to the death of the iplant, since it is unable to produce side shoots. Harvesting techniques should avoid stem damage. Often, less is harvested than is possible. Shoot collection kills the plant, and as the regeneration rate is low, this should be regulated to ensure enough mature trees are left. Natural stands along streams are being threatened by agricultural clearance. Protected areas could be promoted around streams, while individual tree ownership rights might help to protect stands.

The leaves are used for thatching and wickerwork. The wood is used to make small utensils, or is even used in construction, but it is said not to be durable.