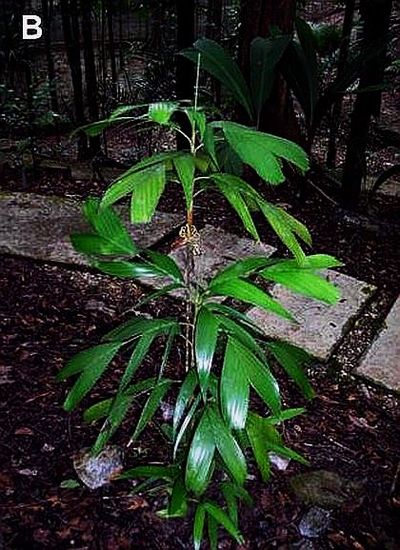 Areca gurita is similar to A. minuta in habit, leaves and general appearance. However, they can easily be differentiated by inflorescence structure and flower arrangement. The rachillae of A. gurita are recurved and resemble octopus tentacles, and the flowers are mostly uniseriate. The rachillae are numerous (3-8 including terminal rachilla) and the anther connective is also linear, rather than the rachillae being few (usually with only 3 rachillae), the flowers arranged spirally on the rachillae and the furcate connective in A. minuta. The flower arrangement in A. gurita appears to be a modification from spiral to uniseriate; spirally arranged flowers still persist at the tip of rachillae. The rachillae are expanded on one side and display all flowers in the one direction. (C.D.Heatubun, Seven new species of Areca (Arecaceae) in Phytotaxa 28. 2011)/Palmweb.

Etymology: The specific epithet gurita, is the Malay word for octopus, which reflects the curious appearance of the inflorescence of this species.

Conservation: Endangered (EN B2ab). This species is known from only four localities in the wild, at least one of which may have been destroyed. Only one locality falls within a protected area (Lavang forest). Areca gurita is cultivated in Semengoh Forest Arboretum near Kuching where the palm grows well and sets fruit. However, further population study is needed to assess the conservation status of this palm, considering the trend of deforestation rates in the region. (C.D.Heatubun, Seven new species of Areca (Arecaceae) in Phytotaxa 28. 2011)/Palmweb.