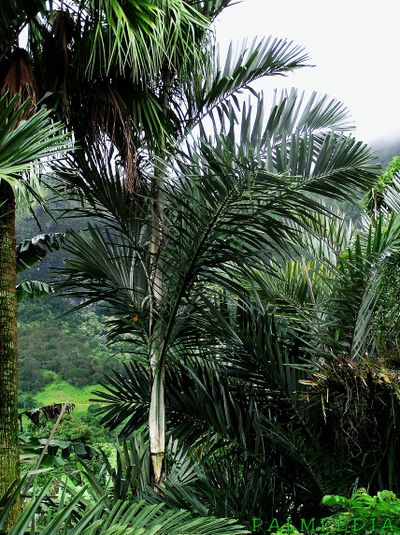 Ho'omaluhia, Hawaii.
is found in Lowland tropical rainforest along coastal North Queensland, and the eastern coast of Arnhem Land. Occurs in the NT, CYP, NEQ and CQ as far south as Tully. Altitudinal range from near sea level to 240 m. Grows in rocky soil in rainforest, vineforest, monsoon forest, found in littoral rainforest in Queensland from Hinchinbrook Island to Torres Strait. It is also found in the Northern Territory in Arnhem Land, Groote Eylandt and in the Mary River area.

The Australian Arenga Palm grows in littoral and near-coastal rainforests. It occurs on stony creek beds on sandy or red basalt soils (Cronin 1989), on coral cays and continental islands (Tucker 1988).

This species is found from sea level to 300 m, favouring dryish locations such as hillslopes or sands within high rainfall areas (Tucker 1988). Plants usually grow in partial shade (Jones 1984a).

Its preferred habitat appears to be depressions in sandy soil, possibly underlain by clays which maintain a reasonably high watertable, and it is probably tolerant of periodic anaerobic conditions. This type of habitat in the Northern Territory is found on the Koolpinyah Surface, adjacent or not too distant from the coast (Northern Territory Herbarium 1999, pers. comm.).

This species tolerates a range of temperatures and will grow in the tropics, subtropics and warm temperate areas but is sensitive to poor drainage (Jones 1996a).

The Australian Arenga Palm is a large clump-forming palm usually with one to three dominant trunks and numerous immature suckers emerging from the base (Jones 1984a). Clumps are often dense and wide-spreading (Jones 1996a). The leaflets are glossy dark green on the upper surface and grayish beneath and are broadly oval-shaped in outline, 2–3.5 m long and supported by a stout, cylindrical, rough textured leaf stalk to 1.6 m long (Cronin 1989). The leaves are subdivided into pinnately divided, close-spaced linear leaflets, growing to 1 m long and 7 cm wide. They have a prominent leaf vein on the lower surface and irregular notches extending partway back from the tip of the leaflet (Cronin 1989). The terminal leaflets have a broad, fused base.

The fronds are wide-spaced along the trunk, which lacks a crownshaft (Cronin 1989). The trunk is light grey, growing to 20 m tall and 30 cm in diameter. When young, the stems are covered with a thick, papery, fibrous tissue. Stems may retain the black fibrous tissue of old leaf bases, however, these are generally shed leaving a smooth surface ringed with leaf scars (Cronin 1989).

Flowers are yellow and about 1 cm across. The ripe fruits are red, purple or brown, globular, approximately 2 cm across and contain one to three seeds. The seeds have a very hard smooth coat embedded in a fleshy layer with a highly irritating juice containing calcium oxalate crystals. The seeds need to be handled with great care since contact with skin causes distressing itching which can last for hours (Tucker 1988). Stems die after bearing fruit from their lower-most inflorescence (Jones 1996a).

The Australian Arenga Palm is a clumping palm that grows to twenty metres tall. The plant suckers from the base and individual trunks can grow to about 30 cm in diameter. The fronds are pinnate, dark green above and paler below, and can have over a hundred leaflets per leaf. The leaflets are notched at the end, with blunt ended leaflets at the tip of the frond. It produces clusters of yellow flowers firstly from the leaf bases higher up the plant, and then progressively down the plant. The fruit are reddish or purple in colour and 1 cm to 2 cm long. Individual trunks die after flowering. (oznativeplants.com)

Palm often grows to 20 meters, Fruit color, Orange, Red; Being a clustering palm it usually has a number of immature suckers at the base. Leaves are pinnate and widely spaced along the rachis, often silvery on lower surface. Fruits are orange to red usually with 3 seeds, round, 2.2-2.8 cm diameter, and the flesh is highly irritant. It has often been confused, with the smaller Arenga microcarpa. The species is listed as vulnerable. Monocarpic: A stem will die after flowering and fruiting. Editing by edric.

Normal procedure of seed tray, tube and then pots is used. Fertilise and water as usual for any other palm. They have shown no undue difficulties; like most clumping Arengas are quite slow growing. Planted in the garden, full sun is tolerated, though semi-shade to establish would be preferred. Their potential as an indoor plant is untried.

In Southern California, and probably most Mediterranean climates, this is a pretty marginal palm. It handles some frost, but the chronic cool conditions of this climate's winters are very hard on this species and few if any adult palms exist in these climates. Those in similar zones on the east coast of the US have much better luck with this one.

Arenga australasica was removed from the Environment Protection and Biodiversity Conservation Act 1999 list of threatened species on 14 December 2013.

Only a single mature trunk in any one clump will flower at any one time. The 1–2 m long inflorescences arise from the leaf bases of the upper leaves first and then appear progressively down the trunk. Once the lowest inflorescence has produced its fruit, the trunk dies and is replaced by another sucker from the rootstock. Flowers are typically clustered in groups of three, with a central pistillate (female) flower and a staminate (male) flower on either side. Male flowers have six or more stamens and female flowers have a two to three celled ovary and a three-lobed stigma (Cronin 1989). The fruits ripen sporadically (Cronin 1989).

The seeds contain an irritant composed of calcium oxalate crystals, which appear to play a role in deterring herbivory (Schire 1989).

Germination is erratic and slow. Seed propagation may take from six months to two years, although bottom heat may improve germination (Jones 1996a). This species can also be propagated from suckers (Jones 1984a). The Australian Arenga Palm is slow growing, even in the tropics.

The Australian Arenga Palm is endemic to Australia, where it occurs in coastal and near-coastal districts of the northern Northern Territory and north-eastern Queensland (Jones 1996a). The Australian Arenga Palm is also found on some off-shore islands adjacent to Queensland and the Northern Territory. In Queensland it occurs from just north of the Herbert River in the south-east, north to Cape York and south-west to Vrilya Point (Tucker 1988). It is recorded in Queensland from Round Hill Creek (8 km south of Lockhardt River Mission); north of Starcke Station (now within the Munburra Resource Reserve); in and around Cairns; at Clump Point (south of Innisfail); and on Bowden Island, North Brook Island and Duan Island (Mt Cornwallis). It is recorded in the Cook Local Government Area (Queensland Environment Protection Agency undated). In the Northern Territory, it is recorded from Arnhem Land and near Mary River (BRI undated). A single sterile specimen has been reported from Elcho Island (Dunlop et al. 1975; Jones 1984a, 1987).

This palm is poorly known in cultivation, grown mainly by enthusiasts (Jones 1984a). A number of specimens are held in Brisbane parks (Jones 1996a) and in the Cooktown Botanic Gardens.

Although widespread along the coast between Cooktown and Cardwell in Queensland, the Australian Arenga Palm occurs in a series of highly disjunct populations (Tucker 1988). This palm is relatively uncommon on the mainland, but is very common on some off-shore islands (Jones 1984a).

Flesh from the fruit is highly caustic.