A. myolensis grows in the mountainous region west of Cairns in N.W. 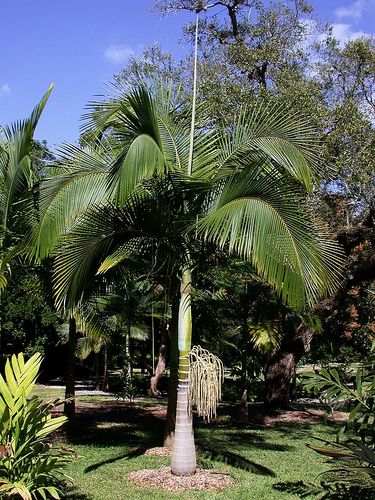 Montgomery Botanical Centre, Florida. Photo by Dr. William J. Baker, Royal Botanic Gardens, Kew/Palmweb.
Queensland on the Atherton Tableland. Confined mainly to riversides and forest. With a restricted distribution, confined to the gallery forests of Warrill Creek and southern banks of the Barron River below its junction with the creek, near Myola on the Atherton Tableland, north-east Queensland [16° 50'S], at 350-400 m altitude, on volcanic soils.

With a sometimes tinge of blue to it's elegant crownshaft, it is a bit diminuative but otherwise similar to the common A. cunninghamiana, perhaps with droopier leaflets. Editing by edric.

It would follow from it's native location that this palm should be a bit more cold hardy than the rest of the genus with an equal affinity for copious amounts of water.

At least in Southern California, this palm is NOT as cold hardy as A. cunninghamiana, but is about the same as the rest of the Archontophoenix group. All pretty much turn to brown crispy structures, while A. cunninghamiana has a few more degrees of cold tolerance (which makes a huge difference as those few degrees of tolerance can mean the difference between life and death). An entire Archontophoenix collection, save maybe one of these (though totally defoliated) and all the A. cunninghamiana, was wiped out by the Jan 07 freeze in Los Angeles.

It is one of, if not the most, rare and endangered species of the genus in its natural environment. This species resembles A. cunninghamiana in gross appearance of the leaves and the lax pinnae. Floristically it resembles A. alexandrae , though the stigmatic remains being eccentric on the fruit is unique within the genus.