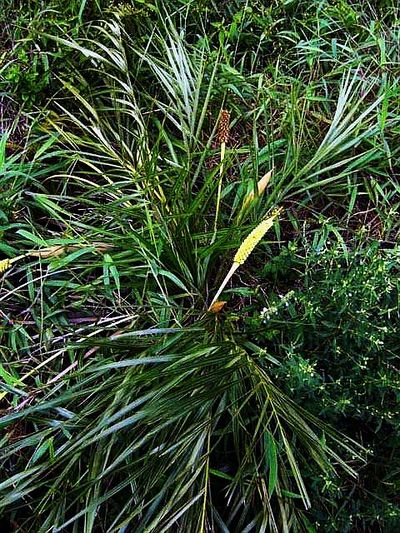 Cordoba, Argentina. Photo by Nigel Kembrey.
also marginal in north-eastern Argentina. Southern America: Brazil, Brazil South, Brazil Southeast, Brazil West-Central, Southern South America; Argentina Northeast, Paraguay; Western South America; Bolivia. Heliophilous and saxicolous, the species is distributed in cerrado vegetation from central Brazil to northern Bolivia, northern Paraguay, and northern Argentina. It is found at 200-700 m on sandy white and gray soils, red latisols, or rocks in savannas and ravines. Rarely it grows at elevations up to 1060 m on the tops of savanna hills. It grows in a transition zone between savanna (cerrado) and pantanal ( flooded) vegetation, as well as in open forests, the margins of forest islands, and gallery forests.

Allagoptera leucocalyx is a small, solitary, but subterranean, giving it the appearance of clustering, scruby palm that grows in sandy soils in exposed locations, sometimes near to sandy river banks. Deep grey/green leaves to about 1.5 m long, with a clustered subterranean, trunk but cultivated palms in humid and semi-shade conditions can to build a trunk of one metre or more tall. Fruits of 2 cm diameter, of triangle form, yellow when ripe. Seeds of the same size. A beautiful dwarf palm, widely distributed in Bolivia, Paraguay, northernmost Argentina and southern central Brazil where it grows in savanna on sandy soils to an altitude of 1000 m (3300 ft.), often forming dense stands. It forms a branching underground trunk that gives rise to a cluster of crowns with plumose fronds that are dark green above and silvery below. Due to its inland habitat it will resist more cold and drought than its popular cousin; A. arenaria. It will do well in a warm temperate or tropical climate and can take moderate freezes. Editing by edric.

Moore (1895) described a new species, Diplothemium jangadense, collected near the jangada forests in Mato Grosso (Brazil), which was distinguished from D. leucocalyx by the number of stamens, leaf length, and density of papillose hairs in staminate flowers. Barbosa Rodrigues (1898) argued that the morphological variability of D. leucocalyx resulted from the type of soils, so he included D. jangadense as a synonym of D. leucocalyx. Barbosa Rodrigues (1899) described Diplothemium anisitsii from Paraguay in honor of Juan Anizitz, Director of the Hortus Fluminensis in Rio de Janeiro; the spelling of the species epithet was corrected later by Barbosa Rodrigues (1903). This species description was based on fruiting specimens and was distinguished from other acaulescent species (e.g., D. campestre, D. lillorale, and D. leucocalyx) by the distribution of floccose scales on the fruit. Nonetheless, the presence of papillose hairs on the calyx margin is quite variable in A. leucocalyx. A similar type of hairs is present in A. arenaria and A. campestris. Although the description of Drude (1881) was emphatic about glaucous papillose hairs on the calyx of staminate flowers (from which the species epithet leucocalyx comes), the most constant characters are number of stamens (9-11) and the length of the petiole and peduncle. In the present revision, the length of the peduncle was the most important reason why A. anisitsii and A. campestris var. orbignyi were synonymized under A. leucocalyx; A. campestris has a petiole 15-40 cm in length, whereas A. leucocalyx reaches 50-90 cm. Another reason was the angle at which the groups of pinnae are inserted on the rachis. Allagoptera leucocalyx also differs from A. campestris in having whitish and wider pinnae. (Mónica Moraes, Flora Neotropica, monograph 73, Allagoptera)/Palmweb

A very rarely cultivated plant, although it is probably very hardy. Despite being quite common in the wild, seeds are almost never offered. Cold Hardiness Zone: 9b, to about -3 C °

Uses: The mesocarp and seeds are edible. The leaves are used to make brooms, baskets, and hats, and the plant is grown as an ornamental. Their leaves serve as fodder for animals and cattle, horses and other wildlife feed on fruit.

"If mine is actually a leucocalyx, it has been bought as such but you never now, it is a superb new introduction. It is many times faster growing than its relative arenaria (mine has been planted near an already adult arenaria as a two strap leaf seedling and now has outgrown the older cousin) and overall bigger (leaves are 1 1/2 times bigger than of arenaria) . Also it has more waxy coating on petiole bases and is cold hardier. Same growing condition with arenaria but a thck layer of fine sea gravel beneath the roots!" (kostheos)

A beautiful dwarf palm, widely distributed in Bolivia, Paraguay, northernmost Argentina and southern central Brazil where it grows in savanna on sandy soils, to an altitude of 1000 m (3300 ft.), often forming dense stands. It forms a branching underground trunk that gives rise to a cluster of crowns with plumose fronds that are dark green above and silvery below. Due to its inland habitat it will resist more cold and drought than its popular cousin A. arenaria. It will do well in a warm temperate or tropical climate and can take moderate freezes. (RPS.com).

"A. leucocalix seems to be much hardier than A. areneria, for me at least." (Dick)