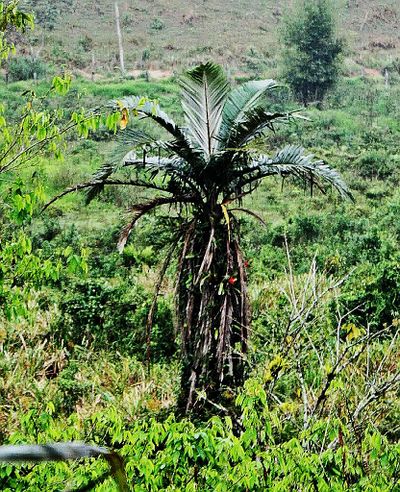 On the way to Serra das Orgaos National Park, 118 sq km of mountainous terrain, between Teresópolis and Petrópolis (Rio de Janeiro), Brazil, Photo by Paul Craft.
They grow in sandy soil in gallery forest and open plains up to the Atlantic coastal forests.

A tall, solitary, attractive palm, to about 15m. It has evenly wide, dark green leaflets, with silvery undersides.

It's the only Allagoptera that likes the shade more than the sun. Likes a well drained position. Drought tolerant but cold sensitive. Slow growing. Cold Hardiness Zone: 10a

"In my neck of the woods, they are very drought tolerant and do not like full sun. I have two planted out in the garden and many many more in pots. Both planted palms are in bright light. the one that gets more watering looks much better, but the one that gets ZERO water is still alive and should make it to the rainy season no problem. These palms are fairly drought tolerant--I have neard they will burn in full sun( if they survive), which is why I planted them in bright light. Has anyone I've noticed two different forms; one type has regularly arranged leaflets, the other one, which I am growing(and find to be much more visually appealing) has interupted leaflets. The spacing of the second form is a very attractive trait." (Cutler Bay, South Florida. Andrew Street)

January 2007 Dransfield officially placed this species in the genus Allagoptera

Allagoptera caudescens var. Bahia; A form of Buri Palm from Bahia, Brazil with unusually and very neatly and beautifully clustered leaflets, quite different than the form from southeastern Brazil that is commonly found in cultivation. Allagoptera caudescens in the past has been classified in a separate genus, Polyandrococos, with two separate species, Polyandrococos caudescens and Polyandrococos pectinata. These two are now regarded as one variable species, but there is still considerable controversy regarding this classification. While Polyandrococos caudescens has plumose leaves, those of Polyandrococos pectinata have leaflets evenly spaced and arranged in the same plane, making a much more handsome plant quite similar in looks to some species of Ceroxylon, even though completely unrelated. The plant discussed here is the flat-leaved form, Formerly Polyandrococos pectinata, which makes a very handsome palm with a dense crown of spreading, leathery leaves, dark green above and silvery below, atop a slim trunk. Native to the Atlantic Coastal Forest in Brazil, it is often found on sandy soils. The Buri Palm grows slowly but steadily and does well in a tropical or warm temperate climate, as long as it does not experience more than a light freeze. Young plants with their usually large, undivided leaves also make lovely potted plants.(RPS.com)