Adonidia merrillii is native to the Phillipines, and so carries a 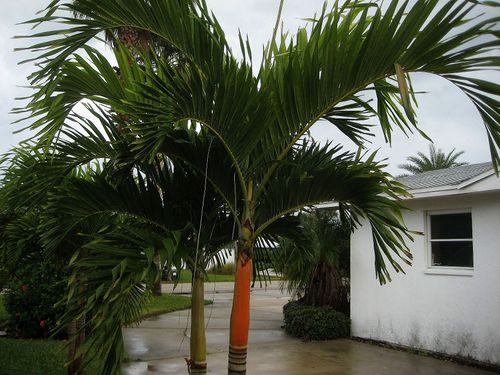 This extremely popular and easily grown small landscape palm can be seen in most tropical locations through out the world. It is a shame that this adaptable attractive little palm is so widely grown that it is taken for granted as "nothing special." It is a neat and tidy pinnate palm with a short green crownshaft under a dozen or so recurved leaves, all atop a grey leaf scarred trunk slightly swollen at the base.

A tropical climate and soil that isn't soggy is really all this palm requires. It will tolerate a wide range of other conditions. It is moderately salt tolerant, but is highly susceptible to the the fatal disease lethal yellow. Preferring sun, it will tolerate some shade.

Though super common in the tropics and subtropics, it is a warm-needy palm, and so far as I know, no one has managed to keep this alive outdoors in southern California for more than a year or two in a row. I have seen it grown here in a pot, and moved in and out. But it is just too cool here in the winters to keep this palm growing.Palmbob 15:41, 20 July 2007 (PDT)

In South Florida, the Addonida merrilli, also referred to as the "Christmas Palm" is extremely common. It's red seeds mature around Christmas and thus it's nickname. Although Lethal Yellowing had an effect on this Palm in the late 1970's, it is now widely planted without any issue throughout South Florida. I have seen mature, healthy specimens as far North as Daytona Beach, Florida, until the winter of 2010/2011. It is unique in it's compact beauty and outstanding crownshaft.

Will not withstand temps. below 32 dgrees F. Cold Hardiness Zone: 10a firm.

Its other common name of Christmas Palm is a result of the attractive fruit which are ripening to a brilliant red at the end of December (in the No. hemisphere).